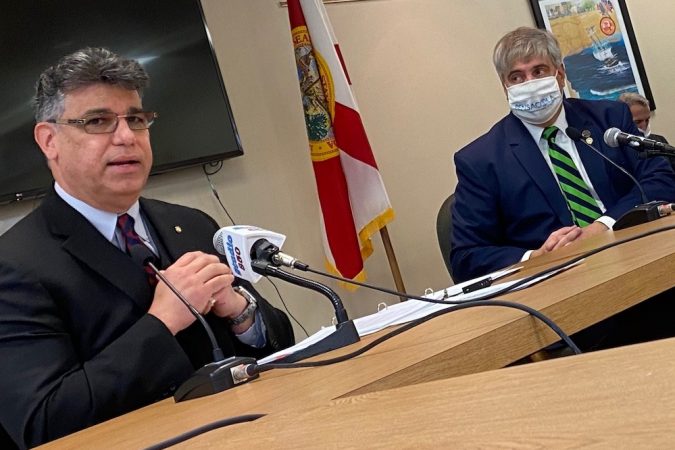 “It’s my first time in Pensacola,” said Ortiz, adding that he was enjoying learning about the city’s history and considered it an ideal place to begin his tour.

Ortiz, who also serves as a city commissioner in Orlando, said he was on a League mission, hoping to fire up Floridians about participatory democracy.

“Our mission resonates with every resident in the state of Florida and for that matter the whole nation, because it’s a mission that needs to get anywhere and everywhere, in terms of people getting involved,” the League president explained.

The purpose of Ortiz’s current road trip across the state is to promote the League’s “Building Stronger Cities” initiative, which stresses “organizing, empowering and delivering” and, more particularly, emphasizes the merits of allowing local governments to make local decisions without state interference and encourages citizens to contact state representatives on the subject.

“Our message is very simple. It’s about engagement, it’s about acknowledging what we have in our hands, and it’s about engaging the state legislators,” Ortiz said during a visit with local press at Pensacola City Hall.

Casting the League’s crusade for local municipalities as righteous — quoting founding father Thomas Jefferson and televangelist Joel Osteen — Ortiz said he considered his current work to be akin to “preaching the gospel.”

“And this is a gospel that needs to be preached to the whole state, to the whole nation for that matter,” Ortiz said.

The crux of this issue regarding local vs. state authority, according to Pensacola Mayor Grover Robinson, resides in Florida’s 1968 state constitution, which provides local governments with so-called home rule authority, allowing for local governments to establish a charter and set ordinances, codes, resolutions and such without state interference.

“It really allows each community to be its own community and accentuate the things that it does best,” Mayor Robinson said. “I think that’s what home rule allows, and the legislation, when they trample on that with preemptions and mandates, it really changes what we can do and what we should be allowed to do by what is the ‘68 constitution that allows for home rule.”

“Home rule safeguards your wishes,” Ortiz said, “in respect to the needs of your local community and allows for local government to attend those needs without interference from state government.”

This concept of home rule has come into play recently, with Florida Gov. Ron DeSantis preempting local governments from enacting any sort of mandated safety measures — such as the wearing of face coverings — during the pandemic. For example, Pensacola enacted a mask mandate but rapidly lost its ability to enforce it because of the governor’s executive order.

“Took the teeth away from it,” Robinson said of the order’s impact on the city’s mask mandate.

“He should allow local governments to handle that,” Ortiz agreed.

Other ground where the state’s home rule concept is currently relevant involves the location and construction of 5G communication towers, as well as regulating short-term vacation rentals. With the 5G towers, state legislators have blocked local governments from having a seat at the table. As for the short-term rentals, legislation is currently circulating in Tallahassee, which would make their regulation a state function.

Ortiz said he is urging citizens across Florida to contact their state legislators in Tallahassee on behalf of their local municipal governments and lobby for the home rule concept.

“This is not for everybody in Tallahassee,” Ortiz clarified. “This is for those who have gone to Tallahassee and forgotten what they are there for. They are there to represent the people.”

Mayor Robinson noted that the legislators representing Pensacola — Rep. Alex Andrade and Sen. Doug Broxson — were reasonably open in communicating with the city and soliciting municipal interests, just not as good as former Rep. Frank White: “Frank would pick up the phone and call me right away and say, ‘What do you think? What’s going on?’”

While there is some objection in Tallahassee to allowing local governments to enjoy a more realized version of home rule, Ortiz said that he thinks some state lawmakers are sympathetic to the League’s concerns. Specifically, he said, state senators may be more likely to consider the matter with an independent frame of mind than their House counterparts, who tend to fall into a party line.

On that front, Ortiz said he has noticed somewhat of a current partisan divide with home rule. While Republicans have historically been cool with the concept — both Ortiz and Robinson are Republican — the issue garners the bulk of its support on the Democratic side of the aisle these days.

“I hate to take sides on this in terms of partisanship because to tell you the truth, I’ve seen, on both sides of the aisle where people are favoring home rule,” Ortiz said. “But, sadly enough, yes, it’s a reality that we see more on the Democratic side favoring home rule.”

Robinson said he felt that the issue should transcend partisanship, contending that such local-level governmental functions as sanitation and road repair shouldn’t be caught up in politics or the tribalistic notion of partisan “sides.”

“We’re allowing the sides to tear at the fabric of what is most important, and that is community, and that’s working together to solve these problems,” Mayor Robinson said.