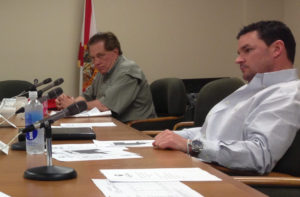 While members of the Community Maritime Park Associate’s Audit and Operations Committee forwarded a proposed lease with Beck Property Company to the main board, they did suggest making some changes. Primarily, they wanted a letter of credit from the property company.

“Nothing but conversation is changing hands,” said CMPA Treasurer Jim Reeves, “and we really should have some recourse if they default.”

Justin and Greg Beck are currently in negotiations over a lease for parcel parcel one at the Community Maritime Park. They are hoping to build a mixed-use development, which will feature their company’s offices on the second floor, with retail below and residential above.

The CMPA, thePensacola City Council and Mayor Ashton Hayward have appointed representatives to negotiate with the Becks. The only other post-ballpark development at the CMP—Quint Studer’s planned office complex—is being used as a template for the negotiations.

CMPA Executive Director Ed Spears noted that a letter of credit was discussed during last week’s negotiating session, but that aspect was “deleted by their attorney.” CMPA Chairman Collier Merrill—the park board’s representative in the negotiations—said that the Becks were offering verbal assurances.

“It doesn’t survive a car crash,” Reeves said. “A letter of credit does.”

“They’re reasonable people,” agreed Committee Chairman John Merting. “I think they can see the bind that we’re in.”

Although they did not have a quorum, the committee took a 4-0 straw vote to forward the lease to the CMPA. Member Fred Gunter recused himself from the straw vote, citing his involvement in bringing the park board a competing offer for parcel one last month.

The lease the CMPA will be looking at calls for the property company to pay $46,222 in annual rent. This is up from the originally proposed $39,700.

“We pushed’em,” Merrill said. “We were quite frankly pushing them to bid against themselves.”

The proposed lease with the Becks goes to the main CMPA board tomorrow. The meeting begins as 1:30 p.m. at Pensacola City Hall.

Also discussed during Monday’s committee meeting, was the CMPA’s deficit. Reeves noted that once the park property began generating bills from the property appraiser’s office, the “deficit will be greater than we ever imagined” with “some tax bills to pay with nobody to pay’em but the city, when you get right down to it.”

Merrill said that he had met recently with Mayor Hayward and Escambia County Property Appraiser Chris Jones. The chairman forecasted “some number south of a hundred [thousand] if they tax the whole thing.”

“We had a good meeting with Chris Jones,” Merrill said. “But he’s gonna come with something, his hands are tied as far as what can be taxed.”