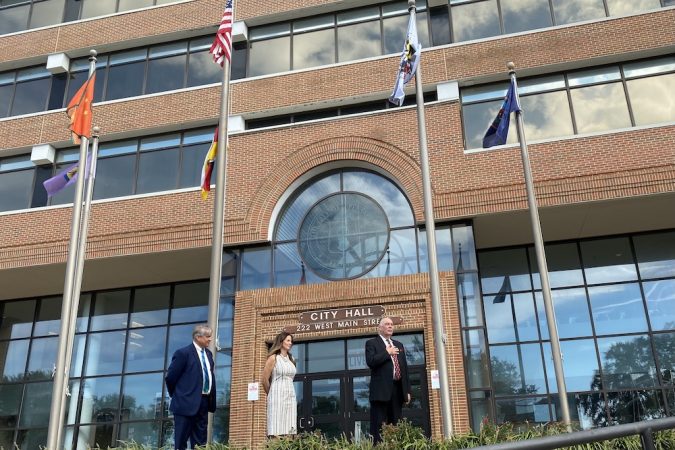 For the second year, the city of Pensacola officially observed Indigenous Peoples’ Day. The occasion was marked Monday with a display of flags representing five regional tribes and remarks from the chief of the Santa Rosa Creek Tribe.

The chief appeared amused that the words spoken in his native language had flown over the heads of those gathered for the Indigenous Peoples’ Day observance — or at least he was happy for the opportunity to educate.

“You look at me like you don’t know what I’m saying,” Chief Skyhorse laughed. “I said, ‘Hello, how are you?’”

Later on, inside city hall during Mayor Grover Robinson’s regular weekly press conference, the chief taught another Muscogee phrase, one that perhaps succinctly sums up a central pillar of the celebration of Indigenous Peoples’ Day: “bomongen heyvdos.”

“Our ancestors were on these shores watching as the first sails appeared on the horizon. And we are still here. We are watching. Bomongen heyvdos — ‘we are still here,’” Skyhorse said.

“We are certainly very proud of our history in the city of Pensacola. It is rich and it is deep, with a significant amount of colonial roots. However, history didn’t start with the colonization of the United States and the Americas, it was here long before,” Robinson said, later clarifying that the city celebrates both Indigenous Peoples Day and Columbus Day, which occurs — not coincidentally — on the same day.

Skyhorse noted that the concept of Indigenous Peoples’ Day, which was first celebrated in Berkeley, Calif., in the late 1970s, was to call attention to the mistreatment of Native American people and was thus slated to coincide with Columbus Day for the purpose of contrasting the two observances.

“I have been asked many times if I would like us to erase and do away with Columbus Day and my answer is a resounding ‘no,’” Skyhorse joked, “because I am guaranteed one day a year when I can come and tell the story of what has happened to our people.”

Also present for Monday’s observance was Florida District 1 Rep. Michelle Salzman. The state rep nodded toward her Muscogee Creek heritage and said she considered the occasion a time for celebrating both “diversity” and “unity.”

“Today is a day we can learn and celebrate together,” Salzman said.

The city of Pensacola first recognized Indigenous Peoples’ Day in 2020, following an effort by Pensacola City Councilwoman Sherri Myers to put the issue on the city’s radar. Myers was assisted in that effort by local tribal representatives, as well as artist Sean Linezo, who was also in attendance for Monday’s observation ceremony.