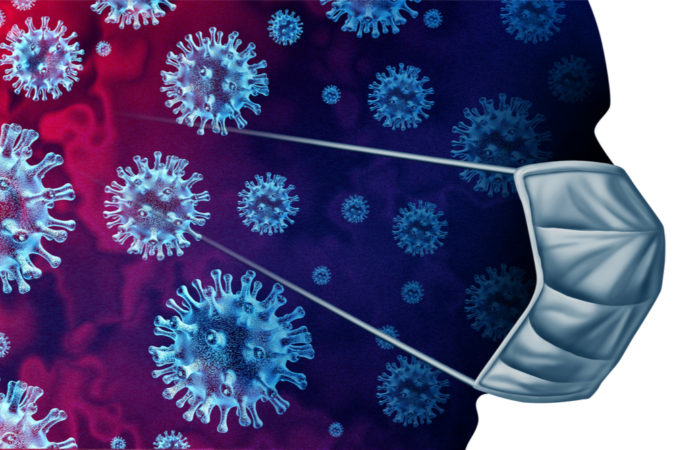 On Newstalk 1370 WCOA, Dr. Peter Jennings, the chief medical officer at Ascension Sacred Heart, talked about the research that has shown that face masks are effective in curbing the spread of COVID-19.

“People talk about, ‘Well, how much of the viral particle is actually captured in a surgical mask or an N95, or even a cloth mask?’ And they look at the very, very superficial level,” said Jennings. “If you look at a virus, it’s small. It’s about 0.1 microns. And you think, ‘Oh my goodness, there’s no mask in the world that’s going to capture that.’ Well, that’s not entirely true. The N95, for instance, captures things that 95% of the things down to 0.3 microns.”

Since the virus is much smaller, do masks even work?

“Well, it works because a virus doesn’t travel alone. It travels as a respiratory droplets,” said Jennings, point out that the respiratory droplets are 10 times the size of a virus and “certainly much larger than the 0.3 microns capable of being captured in an N95.”

He admitted that a single-layer cloth mask is “pretty worthless.” He added, “What is recommended is a multilayered fabric mask, which approaches the same effectiveness as an N95. That’s why it’s strongly recommended to have people mask.”

Studies have shown the effectives of face mask mandates.

“For those places that have required masking, you see about a 0.9% decrease just within the first five days of that requirement to mask, and it goes down 2% within three weeks,” said Jennings. “That’s pretty significant when you’re talking about overall effectiveness within a community.”

He continued, “There’s also some case studies related to how effective they are. For instance, there was an individual that traveled from China. And that individual had COVID, but he wore a mask and none of the individuals on the plane ended up with COVID. I mean, that’s proof in and of itself.”