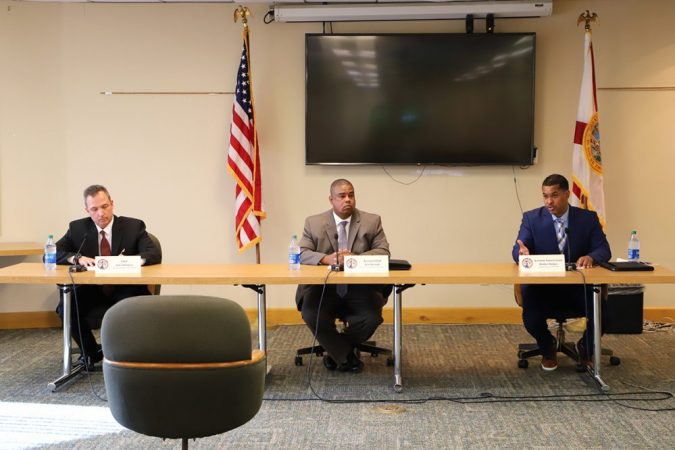 The three finalists vying for the chief’s position with the Pensacola Police Department are in town this week interviewing with city officials. On Wednesday, the trio sat together for a question-and-answer session — closed to the public but broadcast online from city hall — with questions submitted in advance from the public.

The three candidates fielded questions ranging from their professional ambitions to their philosophy on law enforcement and, in particular, thoughts regarding community policing. Gary Peterson, a consultant who has guided the city through the search process for its new police chief, moderated the session

All three chief candidates lined up on some key fronts: each expressed a desire to engage the community in aspects of policing, each said they prioritized things such as mental-health training for officers and working to diversify the ranks of the police department, and each also nodded toward the notion of ‘21st-Century policing,’ which has been an oft-referenced model in inter-city discussions regarding a more inclusive and collaborative law enforcement approach.

But each of the candidates — John Ortolano, chief of police in Hobbs, NM; Booker Hodges, assistant commissioner of law enforcement for the Minnesota Department of Public Safety; and Eric Randall, assistant chief of police at Newport News Police Department in Virginia — also distinguished themselves with varying approaches and answers to questions during the session.

Ortolana stressed his experience as a union lodge president and indicated a desire to work closely with the business community. Hodges spoke about “building trust in the community” and working with churches and other organizations to combat issues like gun violence. Randall — who grew up in Pensacola, where he played youth football with the Rattlers and attended Booker T. Washington High School — flexed his hometown muscles and also said he prioritized community engagement, as well as focusing on modern, tech-based law enforcement approaches and external partnerships.

Community policing was a particular focus during Wednesday’s virtual forum. Each candidate expressed support for a more inclusive approach, though the approaches varied by degrees.

“I don’t like the term community policing,” Hodges said. “I refer to it as ‘us’ policing.”

Hodges said that he preferred to think of police as members of the community they serve, rather than separating into us-and-them parties. In this context, how would the officers want to be policed?

“For cops,” Hodges said, “it’s important for us to go out and police people how we’d want to be policed.”

Ortolano agreed that a proper law enforcement approach “can’t skip community policing.” He noted that he had taught a course on community policing. He considered community interactions ideal opportunities to instill in the public the vision of what he dubbed the “immortal cop”: “teaching them that we are the good guys, we’re not what some people try to portray us as.”

Randall, however, likely expressed a perspective that most resonated with those tuned in to Pensacola’s local conversation when it comes to community policing. Appearing to take cues from the edgier leanings of Pensacola’s CPAC, he said he would create a citizen committee that would assist in the selection of leadership within the PPD.

“That is police reform. That is community engagement,” Randall said, also suggesting the formation of a citizen panel to review use-of-force incidents monthly in a process which would also give officers the opportunity to explain the events. “So, it’s transparency all the way around.”

Next, these three candidates for PPD chief sit for individual interviews with the city’s selection committee. Following that, Mayor Grover Robinson makes a final selection.

“I can’t tell you how impressed I am with all three of you,” the mayor told finalists.