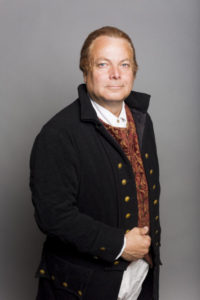 As we look forward to the 2016 elections, who better to explain what the founders of our nation intended than Thomas Jefferson, the man who was the primary author of the
Declaration of Independence?

President Jefferson will be the special guest at Tiger Bay’s Annual Meeting on Saturday, September 26.

Jefferson is portrayed by Prof. Clay Jenkinson, one of the nation’s most popular humanities scholars and the host of the syndicated radio program, “The Thomas Jefferson Hour.” As Jefferson, Prof. Jenkinson has appeared at numerous venues, including the White House, and on television programs ranging from PBS to Stephen Colbert.

Jefferson was an enigmatic man. He believed in smaller government and dismissed the territorial avarice of European powers, but he doubled the area of the United States. He disdained military adventurism, but he ordered America’s first foreign war-in a place where we are still fighting today. He championed America’s core creed of human freedom and dignity, but he was also a man of wealth, privilege and a slave owner.

What would Thomas Jefferson think about the current state of affairs in our country and the world? Are we on the path he and the other founding fathers envisioned? Don’t miss this opportunity to find out, and to ask President Jefferson questions about such important 2016 topics as immigration, race relations, the role of religion, and more.