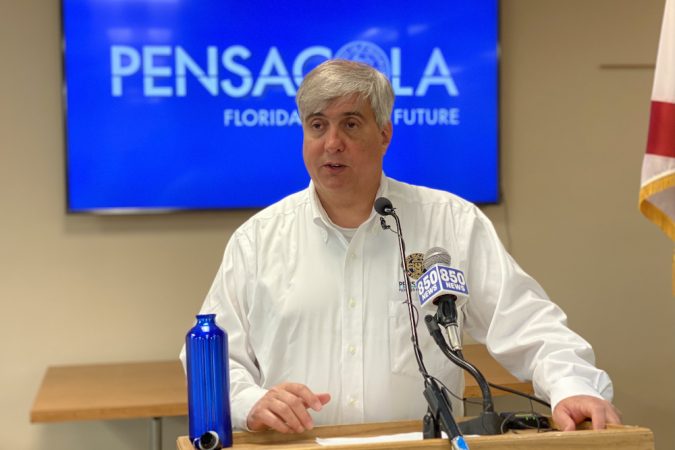 Bartram Park will be getting another art installment this week, and Pensacola Mayor Grover Robinson said Monday during his weekly presser that he’d like to see the trend continue.

“I think it’s always good to have public art, it creates those opportunities for people to see that and it works well with our parks,” Mayor Robinson said.

This new installment — to be unveiled on Wednesday — is a sculpture by Jerry Guy entitled “Overture.” The piece is being donated by Holly Benson, a former state legislator and high school classmate of Robinson, who now resides in St. Louis. The sculpture will join a previous sculpture at the park donated by Benson featuring paper airplanes; this will be the third piece of art donated by Benson, with a fourth on the way.

“So, Holly is single-handedly creating our sculpture garden,” Robinson joked.

Over the weekend, the mayor enjoyed a different type of art in Bartram Park, as he joined state Rep. Michelle Salzman and Waffle House COO Burt Thornton to judge the Rotary Battle on the Bay hamburger contest. Robinson wound up taking home some leftovers.

“We judged the professional competition and it was a lot of hamburgers,” he said. “I didn’t realize — I thought they were only going to give us quarters, they gave us four big burgers.”

This week, the Pensacola City Council will be considering a request from Mayor Robinson to kick in some more funds to develop the skatepark planned for the Hollice T. Williams Greenway park. The project, located beneath I-110 near the police station, has come in about 15 percent over budget due to a rise in labor and materials costs.

“I hate when anything goes more expensive, but that’s where we are with almost everything we’re bidding right now and I don’t think we’re alone it that,” Robinson said.

The mayor stressed that the skatepark is an important project for the city, and also constitutes the city’s contribution toward the overall greenway project, which is being handled at the county level and funded with money stemming from environmental restoration funds associated with the 2010 oil spill.

“We’ve done a lot of engineering, a lot of studying, and we’re ready to go and, at this point, we’ve committed to it,” Robinson said.

The skatepark — including park infrastructure but sans a restroom facility — was estimated to be about $1.8 million. The mayor is asking the council to find another $300,000 to put with that.

“There are certainly places there,” Robinson said, suggesting city council members could secure the funds by reassessing some priorities within the CRA.

As for the restroom facility, Robinson said that the city would eventually like to put a facility at the skatepark, but that other city properties, such as Veteran’s Park, were already in line for restrooms.

“We want restrooms to be there. Obviously, the challenge is funding,” Robinson said. “But, I tell you what, you get the park there. As you build up money, you can get a restroom.”

Studies recently conducted by a University of West Florida profession show that the waters off Bruce Beach are being fouled by human waste leaching from aging downtown sewage infrastructure into the stormwater system.

Mayor Robinson said Monday that the city was working with the Emerald Coast Utilities Authority to locate the sources of the contamination and remedy those trouble spots. These trouble spots will be addressed, the mayor said, as part of the larger Bruce Beach development project, which is itself part of a larger waterfront walkability project.

“If we get marching orders to get Bruce Beach done, I think we’ll certainly have a commitment from ECUA and we’ll move forward and we’ll get what we need to done to get the sewage out of the stormwater and get that fixed,” Robinson said.

While city officials are currently discussing cleaning up the waters off of Bruce Beach within the context of planned improvements for the area, the beach is not the only are suffering for contaminated runoff. Nearby Sanders Beach, as well as other sites, also see such issues. Asked if other areas would be assessed, Robinson stressed that the city would need to focus in on a specific area.

“I think when you have a project going on is certainly the time to get the impetus and desire to go through and fix it. I think that when you don’t have it’s hard to get the impetus because you do have all these other projects,” the mayor said. “So, how do you differentiate between Sanders Beach, Bruce Beach, the one and the other — the one where you’re about to put a park out there and you’re about to put people at, that’s the one I think that you try to go and get done.”

Robinson said that ECUA was committed to fixing the issue of sewage infiltrating the stormwater system and polluting Bruce Beach, but tied the project to the funding of the Bruce Beach improvement project, as well as the overall subject of municipal priorities.

“We’ve got their commitment on board; if we can just move forward and get the Bruce Beach part, we’ll be ready to go,” the mayor said. “If we don’t, we’ll still have all the aging infrastructure, and we’ll have another place where we’ll be unfocused about where we want to go and won’t know what to do, so we’ll be there.”