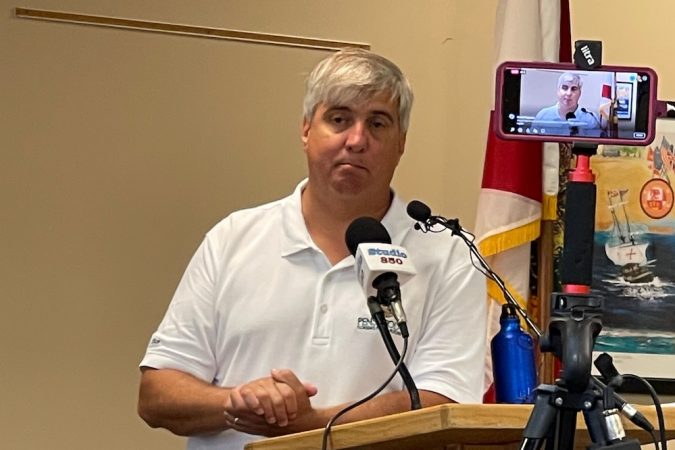 At his weekly presser, Pensacola Mayor Grover Robinson said the percentage COVID-positive cases is up as are hospitalizations.

“We’ve not been tracking hospitalizations, but I did get a text from Dawn Rudolph (Ascension Sacred Heart president) over the weekend, indicating that our hospitalizations were, I think, at 58 – which was not anything necessarily to panic over, but it was up. And we are scheduled to get back together,” said the mayor.

Rudolph is setting up for the mayor and county officials a conference call with healthcare leaders next Monday. During the height of the pandemic, weekly conference calls were the norm, but the meetings had stopped in early June when the Florida Department of Health quit reporting COVID statistics on a daily basis.

Mayor Robinson said Rudolph didn’t know whether the spike is due to the July 4th celebrations.

“To get over this thing, we need to see what we can do about vaccinations,” said Robinson. “A year ago, if we’d had these kind of positivity rates. we would have been significantly higher hospitalization.”

He reiterated what he has said on other occasions that vaccinations decrease the severity and intensity of the COVID if one contracts the virus.

Mayor Robinson has Adam Davis of Bird Rides at the presser, as well as former Councilman Andy Terhaar, who advocated for a scooter pilot program while he was on the council.

The City of Pensacola is partnering with shared electric scooter company, Bird Rides, to bring e-scooters to the city beginning today. The mayor and others demonstrated the scooters outside city hall after the press conference.

Bird currently operates e-scooters in more than 250 cities globally, and they will deploy up to 250 scooters in the franchise area as part of a one-year pilot program. The mayor warned that the scooters will lose power if driven outside the designated area.

Robinson said, “I think if it doesn’t totally shut down, but it goes down to like three miles an hour. So you would be walking much faster than you would be scootering.”

Through the Bird smartphone app, riders can see the nearest Bird scooter on a map, complete the safety tutorial and ride directly to their desired destination. Upon ending their trip, riders simply park the scooter safely along the side of a sidewalk or on the street next to an unmarked curb and take a photo of the scooter through the app to ensure proper parking.

The cost for a Bird ride is $1 to start and a 39 cent per minute fee to ride.

Bird guidelines and rules include:

The Pensacola City Council is holding a workshop on Wednesday, July 28 to discuss three proposals for Lots 4 and 5 at the Maritime Park.

Mayor Robinson praised the analysis the Victoria DeAngelo has done of the submittals: “I’m not prepared to this point ready to go forward. Let me first say the analysis that Victoria did was absolutely…looking at Keith, we were impressed. I mean, we, we had had what we thought it would look like, but she went above and beyond line.”

DeAngelo took each proposal showed out it connected to the master plans for the park. The mayor stressed his recommendation wouldn’t be all about the money.

“We have put certain limitations on the return,” said Robinson. “We’re always much more focused on mission. Money’s a part of it, but we’re going to do mission first and then money is going to be next.”