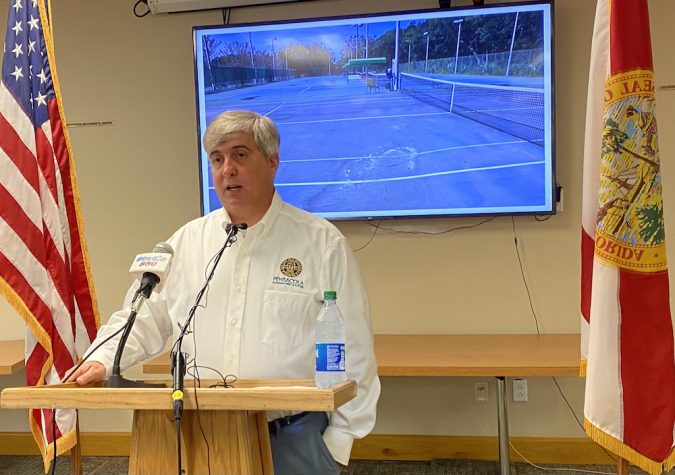 Will Pensacola residents go for full-service sanitation and pay extra to have their trash and recycling containers rolled to and from the curb? Mayor Grover Robinson isn’t sure, but he’s willing to give it a try.

The city’s newly rolled out and so-called “premium collection service” includes the drop-off for an added cost of $20 a month. John Pittman, the city’s director of sanitation services and fleet management, suggested the concept.

“John’s come up with another idea,” Mayor Robinson said, referring to Pittman’s previous move to pick up garbage and recycling cans on the same day.

Robinson continued, calling the premium service an example of a city employee trying something new to improve municipal services.

“My whole goal is to find ways to let them apply good ideas and see what happens. We may not have a whole lot of takers. We may. We just don’t know; we don’t know whether it’s something people want or not,” he said. “We try things out. Not everything has worked, but I think you’ll find us having the ability to try things out and experiment. Overall, I think that helps make us better. We find things that are not working, and we tweak’em.”

“Went through it twice now. Came through this morning, all good,” Mayor Robinson said. “It was really good going 17th to Bayfront; it has its own little lane. You just go right through; it’s awesome.”

The mayor received word from the Florida Department of Transportation that the interchange area was open Sunday morning.

“While I was in church, I got a text from DOT saying it was open,” Robinson recalled, noting that he’d already noticed by that point.

In addition to providing access from the flyover the Pensacola Bay Bridge to Bayfront Parkway and East Gregory Street, this newly opened component of the overall bridge project also allows for travel between the bridge, 17th Avenue north and southbound.

The Homeless Reduction Task Force of Northwest Florida will be presenting a plan this Friday for spending $3 million in federal funds to address the issue of homelessness in the area. Mayor Robinson said that aside from assuring that the group set aside about a half million dollars to use on a program aimed at working with the private sector to realize affordable housing, he’s looking to the task force for direction.

“Most of the — really all of the suggestions, except LOTUS, are coming from the task force,” Mayor Robinson said. “The only thing that I’ve been concerned with is that we have about $450,000 for LOTUS.”

According to its website, LOTUS is a North Carolina-based non-profit that works to “raise awareness about homelessness while advising communities on how to engage the real estate sector in the solution.” When task force leader Connie Bookman initially presented the group’s plans to Pensacola City Council, no such allotment was dedicated for LOTUS, though she agreed the group could be helpful.

Most of the plan Bookman presented to the council involved providing existing service organizations with slices of the $3 million funding and putting some of it towards constructing temporary shelters and even tiny home-type communities. Notably, Bookman had told the city that she thought enough of the task force’s hopes could be realized in time to quickly relocate a homeless camp currently allowed to exist on a greenway under a stretch of the I-110 overpass.

“I think she said Nov. 13 to be exact, and then she kind of caveated that with ‘before Thanksgiving.’ And all of that is really contingent upon a lot of the efforts that are going on with individuals that are working on some spaces out in the county,” said Lawrence Powell, the city’s neighborhood administrator, adding that he did not know what properties Bookman might be eyeing.

Mayor Robinson said that he didn’t expect to have the homeless camp cleared until January, despite Bookman telling the council that, in short, she had divine insight into the matter.

“She kept saying it was going to happen before Thanksgiving, and I was like ‘I don’t think it’s going to happen that fast,’” he said. “God built the world in seven days, absolutely, but he didn’t have to deal with government and get a permit. So, if he had, it would have taken a lot longer. I tell you, government just is slow by nature. This is public money, so the nature by which it will flow through will take us until November to get that finalized and see what happens with council.”

The Roger Scott Tennis Center courts are due an upgrade, as the 50-year-old courts are showing age beyond the scope of the traditional patch-ups. To resurface the courts, Mayor Robinson plans to spend some of the city’s ARPA funds — money stemming from the American Rescue Plan Act of 2021. Also, he intends to partner with Escambia County on the effort.

“These are the conditions of the courts,” Mayor Robinson said, flashing images of cracks on the courts up on an overhead screen. “You can patch’em, but the more you patch, the quicker it goes. The quicker it goes, the more money you spend patching.”

The mayor said that ARPA funds are in fair play to pay for these repairs to Roger Scott’s courts, as the project will improve outdoor recreational opportunities. He’s committing $1.3 million and hopes Escambia County is good for a matching $1.3 million.

Initially, Mayor Robinson approached the city council for the extra funds to resurface the tennis courts, but was rebuffed because, as he explained: “Unfortunately, some members of the council, they just can’t seem — they want to be the mayor and show up and pitch another idea.”

The mayor said that hesitations among city council members centered on district-centric concerns, which he waved off, pointing to an upcoming redistricting process.

“It shocked me. It shocked me in some ways to think that people would not realize and understand how serious the situation is. But it didn’t shock me in some ways, because again, COVID has continued to show us that people get more and more selfish,” Robinson said. “You know, just going to find something to spend in District 2 — who knows, in a few short months, District 2 will look extremely different than it does today. So, if you’re just trying to put arbitrary things in arbitrary lines, it makes no sense.”

As part of the partnership with Escambia County, county residents will have the same access, at the same rates, to Roger Scott’s courts as city residents do. Though it’s not a done deal yet, Robinson said he was confident that the county’s five commissioners would ultimately go for the partnership — “even Doug Underhill, who voted against it, said that ‘if it came forward as its own item, I would vote for it,’” — as it meant Escambia would need not consider investing in its own tennis facility.

“I feel very good about getting money from outside the city and partnering with the county. There’s no reason, we have no county tennis courts — and for them to start that process would be a whole lot more than $1.3 million,” Robinson said.