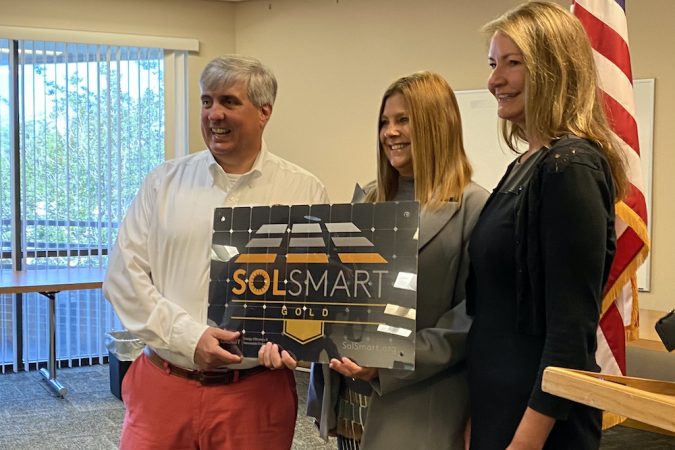 Having recently returned from a municipal scouting mission to Savannah, Ga., Pensacola Mayor Grover Robinson was abuzz recounting the trip Monday during his weekly press conference.

“We’re back and ready to apply some of our knowledge,” Mayor Robinson said.

Robinson was joined on his Savannah venture by City Administrator Kerrith Fiddler and deputy administrators Amy Miller and David Forte. The team explored the coastal city’s port and airport operations, and in particular its downtown area, with the intent of learning lessons to carry back to Pensacola.

“We learned a lot,” Robinson said, explaining that Savannah’s cultural and historic tourism was rather developed and insightful and offered Pensacola a useful template.

The mayor acknowledged that Savannah differed from Pensacola in some significant ways — its port is bigger, its tourism effort more established, its infrastructure of hotels and parking garages more complete — the Georgia city could still offer Pensacola a roadmap towards growth in these areas.

“A lot of it was kind of learning things they had done, steps they had taken, so we could kind of prepare ourselves, put ourselves in the right position to take advantage of those things,” Mayor Robinson said, adding that he felt Pensacola was a city blessed with sturdy bones and one that had already made meaningful gains in recent years. “You know, we have great parks too. Certainly, they have great parks, the way they were designed, but I would stack up Plaza Ferdinand, Bartram Park, Veterans’ Park, Plaza Deluna, Maritime Park and put those competitive with anybody. We just haven’t found a good way to connect them all together.”

One of the things Mayor Robinson and the team from Pensacola was checking out in Savannah was the city’s airport. They’re looking for takeaways as Pensacola looks to grow its airport facility in the coming years.

“Having an airport, and having an airport that can reach an increasing number of destinations, is going to be critical to Pensacola going forward,” Mayor Robinson said.

Robinson was also focused on the airport during a recent trip to Washington D.C., where he’s keeping a close watch on federal funding opportunities. He said that growing the airport’s capacity is essential in providing adequate business and leisure travel options to and from the area.

“It’s incredibly critical to have that way you connect to the outside,” the mayor said. “I’m just amazed at where we’ve gotten to, but we’ve got a lot further to go.”

Robinson said that he expects federal funding opportunities to open up soon — “we’re positioning ourselves for when those monies start flowing and are there and can be applied” — and that he could see expansions at the city’s airport occurring within the next five to seven years.

“That would be a fast approach, but I mean I think we all want to move it fast,” the mayor said.

Sailing on a Dream

The American Magic sailing team is returning to Pensacola to prepare for its next try for the America’s Cup race in 2024. Mayor Robinson said that its exciting to have the team returning to the Port of Pensacola, but he’s more excited about the prospects for growing the sport of sailing overall in the community.

“I mean that’s what’s attractive to us, is if there was an opportunity to do something like that,” Robinson said. “Obviously what we’re looking at interim term is just getting the American Magic back, which is exciting, and that’s great, and that’s a part of it, but I think we’re also looking long term.”

The American Magic team previously leased space at the Port of Pensacola. Now that the team is returning, there have been pitches made for entities such as Escambia County and the city of Pensacola to help offset some of the team’s expenses in exchange for the benefit of being associated with the country’s premier sailing team, possibly an official branding deal and also potentially a partnership designed to foster a vibrant sailing program aimed at training competition-level sailors.

Mayor Robinson said that the city was in talks with the American Magic team, and that it would be more inclined to offer up some space at the port than to kick in actual dollars to the cause.

“We would not be dedicating any taxpayer money, but we have enterprise funds and things we can look at, we also have land at the port, to where if it was a long-term situation and they wanted to move a significant amount of their operations here, we do have land at the port where we could work with them,” Robinson said, later explaining how the sailing operations would fit into the port’s overall portfolio.

“We’ve got that acreage available for usage. We want to find some way that it’s marine-related and someway that it’s performance and I think if we can find those things a different way and we can create that niche for us, it could be the right thing for us. We’re a niche port, and as they said at the CiviCon events, the ‘riches are in the niches,’ and so we’re gonna do a niche that is right for us, but if there’s opportunity for that to work for us we’re obviously listening with ears open and we can see what we can do.”

In order to receive this SolSmart designation, local governments must make changes in their processes to reduce the cost and time it takes to install a solar system. Such changes include altering permitting processes, as well as planning and zoning procedures.

“The city is always striving to keep our codes and our processes progressive,” said Development Services Director Sherry Morris. “Anything that we can do to facilitate green building practices, energy conservation, we try to go the extra mile to do so.”