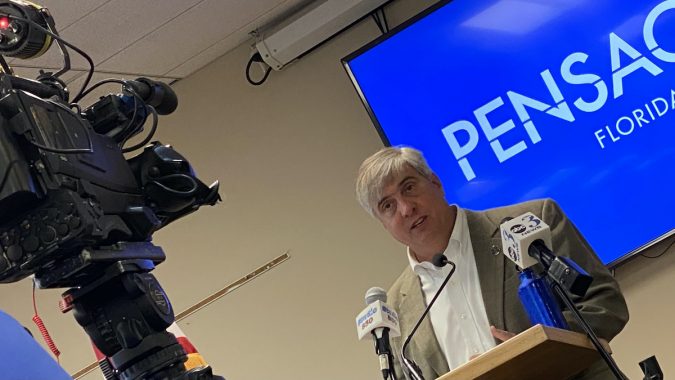 Pensacola Mayor Grover Robinson opened his weekly presser conference Monday morning on solemn and somber notes — one, the anniversary of a local and national tragedy, the other, the passing of friend and colleague.

Noting the city’s flag flying at half-staff outside Pensacola City Hall, Mayor Robinson began by acknowledging the second anniversary since the terrorist attack on Naval Air Station Pensacola and the subsequent response from local law enforcement.

“We just became part of the worldwide terrorism stage,” the mayor said. “I will say, while it was tragic to be on that stage, I think Escambia County and the city of Pensacola showed what we do and how we prepare and how we picked ourselves up from that.”

Next, the mayor said a few words about Doug Halford, who passed away last week. Halford, like Robinson, worked in real estate — the mayor referred to him as both “mentor” and “competitor” — and like the mayor, was involved in local politics, serving as a Pensacola City Council member.

“He was a great man,” Robinson said of Halford. “Great in the real estate industry and certainly served his chance at public service here with the city council.”

Also, before elaborating on a few issues of note, the mayor spoke a bit about Bike Pensacola’s recent Gonzalez Street Shareway Project, which saw a stretch of the street shifted to a model meant to demonstrate the merits of a shared roadway. The mayor said the one-day experiment seemed to work well after some initial issues at certain intersections along the route.

“The share route worked well, and we could see what Gonzalez could be, connecting North Hill to East Hill and across that area,” Robinson said.

Last week, the Pensacola City Council moved forward with allocating a portion of federal funds to address the issue of homelessness. Mayor Robinson said Monday that he was pleased to see the progress, even though the council did not allocate all of the nearly $3 million in American Rescue Plan Act funds.

“I couldn’t be happier that we’re moving forward on some solutions; I think it’s going to allow us to get out of the predicament that we’re in and really establish for the first time some identity of where we’re going,” the mayor said.

The specific predicament the mayor refers to is the homeless encampment underneath the interstate. City officials have assured area residents that the encampment will be moved, but first, it intends to ensure enough shelter beds in the area to accommodate people camped under the interstate.

A municipal eviction moratorium is currently in place to protect the homeless campers. The reason for this is twofold: officials did not want to displace people during a pandemic, but also because any evictions without the availability of shelter space would risk triggering a textbook lawsuit against the city.

Mayor Robinson said that he beloved the projects funded by the city council last week would result in the necessary shelter beds, and that, besides, it wasn’t the city, but rather the Florida Department of Transportation that would officials be evicting people from the camp, which is situated where the state is about to begin a greenway project.

“It’s FDOT’s property, and they have made it very clear that they are going to put up signs at the first of the year,” Mayor Robinson said, adding that it was also illegal to camp beneath an interstate and that the city’s police department would likely be involved in any removal efforts at FDOT’s behest: “I think ultimately they may be looking for us to assist with enforcement and we may have to.”

Hands Too Full for Electricity?

This week, the city council will hold a workshop on the possibility of conducting a feasibility study concerning starting a municipal utility company in lieu of re-upping a lease agreement with Gulf Power (Florida Power & Light).

Mayor Robinson said Monday that he felt the council might be getting ahead of itself.

“Here’s the deal — the council doesn’t negotiate the contract; we negotiate the contract and then come forward,” he began. “If they want to figure out and go develop their own power company, that’s fine, but I think they need to figure out also whether they’d like a deal with the existing one, because if you could do one with the existing provider that could save you a heck of a lot of time and money.”

The mayor said that while he would like to see certain things develop in the negotiating process — such as a commitment to underground more utilities — he also felt the city was in no position to step away from its relationship with Gulf Power to form its own company.

“We have our hands full,” Robinson said. “The last thing that we need to do is to lose focus of what we are doing to go run a utility that we don’t have to run right now. I mean, the power works pretty well, all the lights are on, everything’s going. I mean, we don’t have to step into that.”

And if a municipal utility was something to be pursued, he continued, then perhaps he wasn’t the person to be leading that effort for the city.

“If you’re going to go in and create a power initiative, go ahead and take over the electricity system, I think you need a mayor who makes that a priority,” Robinson said.
“That’s my feeling. If it’s a hot topic, then Pensacola can elect somebody who wants to take over the power.”

Over the weekend, the Pensacola Civitan Club built a residential wheelchair ramp for a family with a 2-year-old child who needs the ramp. The installation was the group’s 500th ramp installation.

Mayor Robinson said that he had attended the organization’s 300th and 400th ramp installations in the area during his time as an Escambia County commissioner and that he also attended Saturday’s installation of the 500th ramp.

“That’s 500 individuals in our community that need ADA assistance at their house with a ramp, and Civitan has built those,” Robinson said, praising the group’s work. “That’s 500. It’s hard to kind of wrap your head around how many that is.”