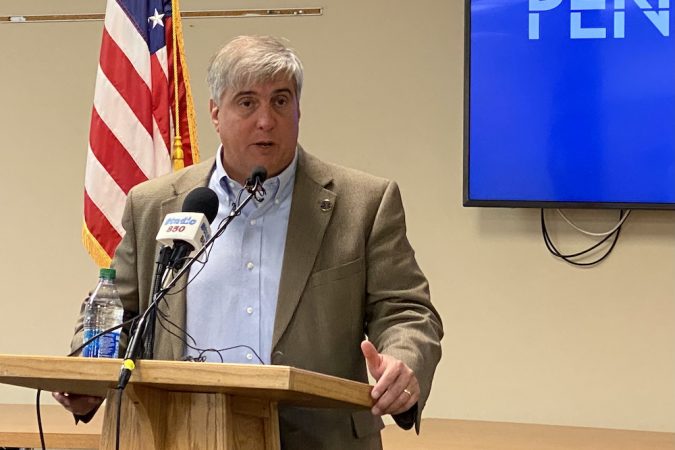 Monday marked Mayor Robinson’s first press conference in quite a while without a complete COVID rundown. No case count. No hospitalizations roundup. Just a test positivity rate: 3.4 percent.

“We continue to see these numbers coming down,” Mayor Robinson said. “At this time, we continue to see low hospitalizations, low transmission, low positivity rates. So, all of those things are good, but we are continuing to be vigilant on that.”

As COVID numbers have fallen, the mayor has decided to stop requesting the relevant data from area hospitals. If there is another spike, such as when the Delta variant of the virus was making its rounds, the city will resume reporting out COVID information.

Instead of coronavirus numbers, Robinson gave us something else Monday: tree numbers. The city intends to plant about 300 trees as part of its tree refurbishment plan.

“With the goal of replacing trees that were lost in city parks during Hurricane Sally,” Mayor Robinson said. “Helping replenish Pensacola’s tree canopy for future generations.”

The city will be planting these trees from December through February, with more information on locations to be released soon. The tree refurbishment plan initially kicked off on Arbor Day.

Campout Under Overpass Over?

This week, the Pensacola City Council will be assessing recommendations from the Homeless Reduction Task Force of Northwest Florida on how best to use roughly $3 million in federal American Rescue Plan Act funding to address the needs of the homeless community. In addition to addressing the general needs of the community, officials are hoping that the task force recommendations will alleviate a growing homeless encampment under a stretch of Interstate 110 overpass near downtown.

“We are going to have to move the individuals at I-110 by the first of the year. I think we still have some time to do that, Mayor Robinson said, referencing the impending development of the area in question into a public greenway.

Task force leader Connie Bookman has said that she expects the I-110 encampment to be cleared by Thanksgiving, as the people camping there will be able to secure shelter space or housing; while there is a shortage of availability of either, the task force is relying on the development of multiple campsite areas with facilities and, in some cases, temporary shelters. The mayor has been skeptical of such an optimistic timeline.

“I’ve said, ‘if that’s what Connie wants to do and she can make it on that deadline that’s all great.’ But, I mean, my realistic deadline is more the first of the year,” Robinson said.

The mayor went on to say that numerous people from the I-110 camp had been placed in housing, but that more people inevitably moved in to take their places. He said it was difficult to say if the encampment was attracting additional people from the local area or if people were coming to the encampment from outside the area after learning that the city was allowing it to continue to exist.

“Well over 50 people were placed out of the camp and into home conditions. Obviously, the challenge is the 50 sort of original people that got going, we moved them, and yes, we brought in a hundred more,” Robinson said. “I think there’s a question of whether we brought more people in, or those people were already here in Northwest Florida and then they felt like they had a place to go. I think both of those arguments are a little true.”

Speaking about those coming to the encampment from outside the area, the mayor said that ultimately it would be best if they returned to where they knew people and potentially had more of a support network. As for the local population, Robinson said that the city will be doing as much as it can with the $3 million in federal funding, but that the city couldn’t shoulder Northwest Florida’s homeless issue alone.

“The city of Pensacola cannot absorb all the homeless in Northwest Florida. That’s an unrealistic expectation,” Robinson said. “We’re going to put forward what we can, we’re gonna partner with the agencies that we do, then that’s what we’re going to basically work with from there.”

Essentially acknowledging that the city will be unable to completely wrap its arms around the local homeless issue on its own — and certainly not with only $3 million to work with — Mayor Robinson said that he was glad Pensacola was making the effort to improve the situation as much as it could.

“I’m proud of the fact that at least we tried,” Mayor Robinson said. “I mean, show me another entity in 150-mile radius that’s really trying to do something.”

Mayor Robinson selected his words purposefully and carefully — polite, considering the considerable windfall of funding Pensacola has received from the group — but said that he thought Triumph Gulf Coast could “probably be a little more open.”

“I do think it would be better if Triumph could be a little bit more wider in what they were thinking of,” Mayor Robinson said.

Triumph is the body designated to dispense a large chunk of funds stemming from environmental fines associated with the 2010 Deepwater Horizon pipeline blowout in the Gulf of Mexico. The mayor was responding to a question concerning some recent critique aimed at Triumph’s funding decisions, and he said the overall region could benefit from some “transformative” projects.

“I think there’s a desire to have transformative projects occur out of that funding that are going to move not just Escambia, Pensacola, Okaloosa or any individual county in Northwest Florida forward,” Robinson said. “I commend the thought process on Triumph to find those, but I do think they need to be a little bit wider in the net they cast. They’ve got a very narrow net, which makes it very challenging for some of the entities to work.”

The mayor said that he expects to see future requests for Triumph funding coming from the Port of Pensacola, as well as George Stone vocational school and Pensacola State College. He pointed to ST Aerospace’s operation at the Pensacola International Airport, where Triumph funding has gone to support infrastructure necessary to the aviation maintenance and overall company’s operations.

Mayor Robinson said that it remains to be seen if city of Pensacola employees will be impacted by the federal vaccine mandate for, among others, government workers. Florida Gov. Ron DeSantis is challenging the mandate in court.

“You tell me. I mean, you know, we’ll see what happens. I guess until we have that court case that kinda tells us what to do we’re sorta stuck,” Mayor Robinson said.

Currently, the city is offering one more month of financial incentives for employees to get vaccinated. Nearly 60 percent of municipal workers are fully vaccinated.

“I can tell you from a state mandate, the state says we pretty much can’t do anything,” Robinson explained. “So, we will continue to work as best we can to encourage people.”