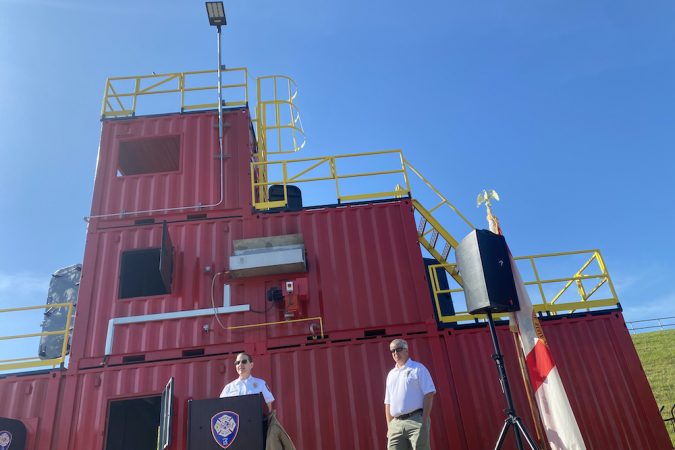 Pensacola Mayor Grover Robinson took the occasion of his weekly press conference Monday to show off some of the Pensacola Fire Department’s new training infrastructure.

“We are very excited to have a new maritime fire training simulator at Fire Station 4,” Robinson motioned toward the towering structure behind him. “This is the only maritime live fire trainer in this region.”

Pensacola Fire Department Chief Ginny Cranor said that the new training simulator plays a key role in ensuring the city’s firefighters remain at the top of their game.

This maritime training simulator differs from a traditional land-based structure simulator in that it allows firefighters to practice under marine conditions. The simulator structure is equipped with the ladders, hatches and materials encountered on marine vessels.

“The tactics and strategies involved in structural firefighting versus shipwork firefighting are completely different,” Cranor explained. “The materials burning, … just the construction, the rate of heat release of materials that are burning and the best extinguishing practices, those are all different factors.”

Having a training simulator such as this, the chief said, was a big advantage for a coastal city, one boasting a port, like Pensacola.

“This simulator is going to better prepare Pensacola firefighters responding to the Port of Pensacola, but also regionally to ship fires in our entire region,” Cranor said.

As this is the only maritime training simulator in the region — “from Panama City to Mobile” — it will be utilized by the PFD and other firefighting units.

“It is definitely a regional asset, so we will have law enforcement doing some homeland security type exercises in it and possibly military and then definitely all of our firefighting resources,” the chief said.

In addition to providing local and regional firefighters with a new piece of training infrastructure, items like this new maritime training simulator also help boost the city’s ISO rating, a ranking provided by the Insurance Service Office, which factors into area insurance rates.

“The score reflects how prepared a community or area is for fires,” Mayor Robinson explained.

Effective June 1, Pensacola Fire Department’s ISO rating will be a 1, the highest rating on the 10-point scale.

“Less than 1 percent of fire departments in the United States have a class one rating,” Robinson pointed out.

Chief Cranor explained that numerous factors played into the ISO rating, ranging from available water supply to department staffing. Ensuring that the force is properly trained, she stressed, was paramount in the calculation.

“The largest part of what’s measured in the ISO score,” Chief Cranor said, “the largest part of it is what Pensacola Fire’s doing everyday: response to fires, drills and training, pre-fire planning activities, fire safety inspections, construction plan reviews and then also the apparatus and the equipment that we have.”