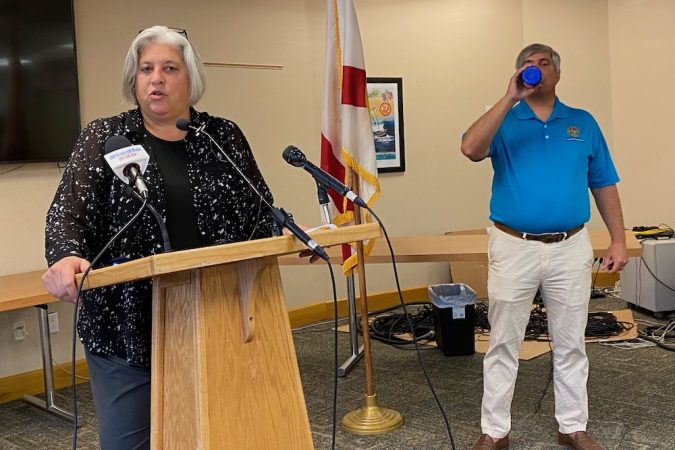 Pensacola Mayor Grover Robinson took a few moments during his weekly press conference Monday to talk about his recent selection of Amy Miller as deputy city administrator. Miller, who currently serves as director of the Port of Pensacola, will step into her new role next week when she will take charge of municipal enterprise divisions: the port, the airport, sanitation and Pensacola Energy, the city’s natural gas company.

“Once we allowed her to go market the port as a niche effectively, she took it from being in the red to being in the black and being very successful,” the mayor said. “So, I’m confident she’s going to be successful at what she does with leading our other organizations.”

Robinson noted that the deputy administrator position is his first executive-level position hire since announcing he would not be seeking reelection in 2022. With that in mind, the mayor said, he wanted to hire from within instead of bringing someone new to town. Miller was competing with three other city employees for the job.

“We chose Amy because she was the best choice for us and the city,” Robinson said. “I think she offers a great opportunity. And I think if we’d had an open selection that would have been a national selection, I’m not so sure that we wouldn’t have also picked Amy.”

Stepping into Miller’s job at the port will be her current number two, Clark Merritt. Miller herself is replacing Dick Barker, who is retiring this month after working for the city for 40 years.

“Which sounds like a lot,” the mayor noted of Barker’s tenure, “until you realize, at the retirement celebration the other day, his mother worked 48 years. So, even she was a little down on him that he didn’t live up to quite as many years.”

For more than a year, the city of Pensacola has been keeping tabs on local COVID stats, receiving information from the department of health and local hospitals, and relaying that information to the public. But, with coronavirus counts — positivity rates, hospitalizations, etc. — trending south, that practice could soon come to an end.

“The numbers are continuing to be very positive — or, I guess, negative, which is positive for us,” Mayor Robinson said.

The positivity rate is currently just below 3 percent. And hospitalizations are holding below 20, with 14 individuals hospitalized as of Monday.

Mayor Robinson said that the city has already ceased its regular calls with local hospitals — “because they feel like at this point it’s well within their range to manage” — and that if hospitalizations continue to stay below 50 through the end of the month, then the city will stop gathering and reporting hospitalization counts.

“I think really getting the vaccine has been the catalyst for this,” Robinson said of the falling numbers, encouraging people to get the vaccine.

While COVID numbers are falling, other numbers, specifically passenger counts at the Pensacola International Airport, are rising. Mayor Robinson, relaying some recent notable counts, said that the city’s airport continues to outpace airports in other regions, as well as nationally. However, the uptick is in line with airports along Florida’s Gulf Coast.

That means that local airport traffic is up about 22 percent. Nationally, Robinson said, there’s about a 24 percent decline in airport traffic. Zooming in, nearby Mobile, Ala., is down 10 percent; Tallahassee is down 28.9 percent; Jacksonville is down 18.1 percent; and New Orleans is down 23.7 percent.

Interestingly, other Gulf Coast airports in the Sunshine State are also experiencing an uptick. For example, Fort Walton Beach’s airport saw a 46 percent increase in traffic, while Panama City increased by 82.1 percent.

Mayor Robinson connected the success of local airports to an increased interest in Northwest Florida, saying the trend bodes well for the area’s future.

“As we move forward, the demand is there. For so long, we kept trying to figure out how to create demand for this place — when you see what’s happening in Pensacola, Fort Walton, Panama City, those numbers are all green, way in the green as far as being above where we were. People want to live in places people want to come to,” the mayor said.

As she prepares to leave her post at the port for an office at city hall, Miller spoke a bit during the mayoral presser Monday about the timeline involved with getting Streamline Boats set up at the port.

“I’d like to think, maybe, this time next year we’d see a boat come out with the little silver plate that says ‘made in Pensacola, Florida,’” Miller said.

Currently, Streamline is working to get their site at the port ready. The company has reached an agreement with the city that calls for repairs to the port facility damaged during Hurricane Sally to be worked into the company’s project; the city’s insurance will cover the repair portion of the work.

“What they’re gonna do is they’re gonna take out some damaged portions of the roof, some of the damage that was caused by the hurricane has to be torn out, and then they’ll go back with their structure that will incorporate repairs from the hurricane and their improvements into one project,” Miller explained.

Apparently, Streamline is ready to get settled into the port as quickly as possible.

“They’re ready to get started. They’re in engineering right now. They’ve been on-site, actually beginning demo, starting last week, and they should be moving forward from there, expeditiously — they’re very anxious to get up and running,” she said, adding that the company currently faced a backlog of about 500 boats. “They can only produce about 125 boats a year in Hialeah. This plant will have basically that same capacity, so they’re very, very anxious to get up and running and start building boats.”

Eventually, Streamline is expected to employ about 100 people. Initially, 15 of those employees are moving here from Hialeah, and another 30 will be hired locally. The remainder will be brought aboard over three years.

Miller said the company technically has 12 months to get down to business as per the lease, but that she expects they’ll cross the finish line quicker.

“They’re actually looking to try to advance that timeline,” Miller said. “They are very, very anxious to try to get that project and start making boats as fast as they can, simply because of the demand for their product.”