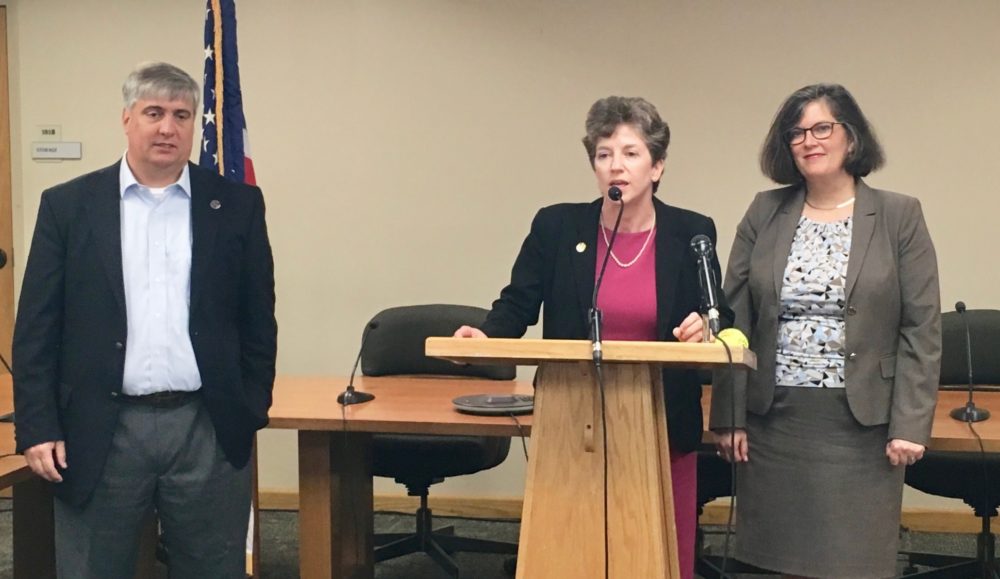 During Monday’s press conference, Pensacola Mayor Grover Robinson spoke on a number of issues, including the announcing of new hires and plans to work with neighboring municipalities when possible.

Hindsight Vision in the Rearview

Looking back on last week’s strategic plan workshop with the Pensacola City Council, Mayor Robinson said he was optimistic about the city’s efforts to draft a mission statement and identify core values and priorities.

“I think we’ve got a game plan going forward,” he said, pointing to the city’s statement laying out a draft version of the mission and priorities.

The mayor said that the city council will take a look at the draft after the public and city staff has had time to digest it and consider their input.

“We kind of pull back, get their comments,” the mayor said, regarding public input.

Robinson also addressed the fact that council abandoned the workshop’s framework built upon the mayor’s transition team’s report. He said he felt that it was natural “to move from the strategic to the specific,” but that council eventually “got back to the strategic”; the mayor also said the episode was an example of he and the council learning to work together after years of contentious back and forth between the city’s legislative and executive branches.

“I think it just highlights some of the challenges of us working together,” Robinson said, adding that he expected each successive episode with council to go better. “I don’t expect us to be perfect, it’s not my goal to be perfect, it’s to be better. Every time we do it we ought to be better and I think that’s the goal and what we’re shooting for.”

Scooters On The Way

After a brief appearance, then disappearance, Blue Duck Scooters may be coming back to town. Mayor Robinson said that the city was currently is discussions with the scooter company — which rents out scooters for short term use — about the particulars of any agreement that would allow them to operate in Pensacola.

The mayor said that tentatively, the scooters will be available in areas of town with lower-speed roadways, such as downtown. Riders will not have to have a license, but will need to be at least 16-years-old. The use of helmets has not been discussed.

City discussions with Blue Duck Scooters have centered on licensing fees, and insurance (the company will carry the insurance and indemnify the city), as well as hours of operation. Robinson said that Blue Duck would be shutting down operation by 10 p.m., in part because the company didn’t want people riding the scooters drunk.

“They felt like people may ride them to bars, but they didn’t necessarily want them riding afterwards,” he said. “We felt like that was a good idea.”

Because Blue Duck intends to make the scooters available at Pensacola State College, Robinson said he was concerned about the surrounding higher-speed roads, such as 9th and 12th avenues, as well as Tippin Avenue.

“I think there’s some geo-fencing that they can do with that,” he noted, suggesting the company could technologically and geographically restrict use of the scooters.

The mayor said that the details of any arrangement with Blue Duck are still being finalized, and that he hopes to be able to have a potential ordinance allowing for the use of the scooters in the city before city council’s next meeting so that it can be approved by mid June. He conceded that such a timeline is “ambitious.”

Adding to the Team

Two new hires were announced this week. In addition to bringing on a new director of Sanitation, the city is also filling out its legal office.

“He started at the bottom, doing garbage collection, to now a director,” Robinson said.

The mayor said he was “very excited” to bring Pittman on, and also noted that the city was bringing on another African-American hire.

“He’s also an African-American gentleman, so we’re excited,” he said. “We made a commitment that we’re going to make a team that really looks more reflective of who we are, so we’re excited about bringing Mr. Pittman on.”

“She has a wide array of exposure and experience that I was looking for in a new assistant city attorney,” Woolf said, pointing to Lindsay’s more than 20 years of experience in employee and municipal law.

Woolf noted that the addition of Lindsay brings the legal department back up to its historical levels, with four attorneys and two legal assistants. She said the city had recently brought on Jessica Whittle as a legal assistant.

In addition to being the city’s new assistant attorney, Lindsay also has another job: she’s the mayor of Milton. She’s also Mayor Robinson’s longtime compadre.

“As I said on the radio this morning, we will have two mayors at city hall now,” Robinson said. “Heather’s a good friend of mine, we grew up together, we graduated from Washington High School.”

Water Under the Bridge

The two municipalities also met to discuss the potential for working together, along with Gulf Power, in an effort to run power lines underground.

Also on the table, a discussion about Gulf Breeze’s success in attracting tech start-ups and Pensacola’s desire to do the same.

“We did talk about that, in hopes of growing that,” the mayor said.

But, in addition to any specific thing, the meeting between Pensacola and Gulf Breeze was meant to go some distance toward healing old wounds and establishing common ground where the entities can work together.

“Overall I think it was just trying to build a better relationship,” Robinson said. “Let’s face it, Gulf Breeze and the city of Pensacola really did not talk for a few years. There were some ugly issues with natural gas and a variety of other things that happened there, and from our standpoint we wanted to just keep continuing to figure out ways we could work together.”