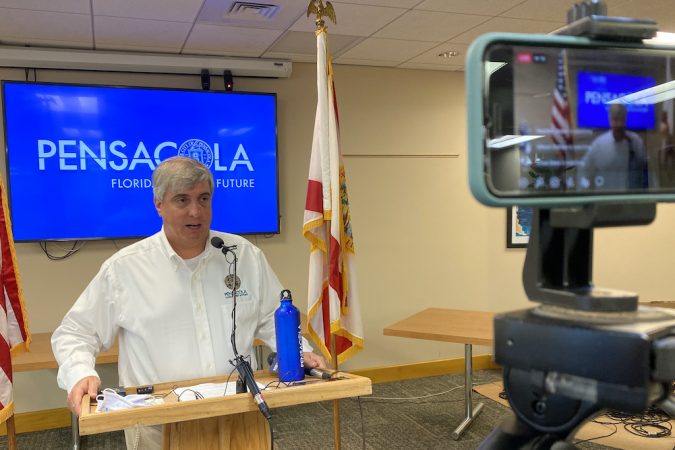 There’s still a lot of folks in the hospital due to COVID-19. But less than last week. And that is the silver lining Pensacola Mayor Grover Robinson chose to focus on Monday morning during his regular weekly press conference.

“I think the big news today is sort of where we’re going with COVID-19 numbers,” Robinson said. “We have seen a fairly significant drop.”

As of Friday, there were 224 people in the region hospitalized with COVID. By Monday morning, that number had dropped to 181.

“We’ve almost come down 50, just through the weekend, and we’re continuing to see it drop,” the mayor said. “All the hospitals now are below a hundred.”

According to data the city has received from area hospitals, there are around 50 patients each at West Florida and Baptist hospitals, and Sacred Heart is below the 100-mark. Additionally, while the positivity rate is only down to 17.3 percent, the number of people getting tested for COVID is less than half what it once was.

“I think this is really starting to show some of the effort we’ve made are working, and hopefully we’re getting through Delta,” Robinson said. “But I would say what I continue to say, don’t let your guard down because this thing will come back. So, this is where you have to stay on top of things — vaccines, boosters, a variety of other things.”

Because COVID numbers are improving some, the city has reopened community centers to 75 percent capacity and has also begun to schedule more events on its books. Robinson said that the city would need to remain flexible in its response to the evolving virus.

“These things will ebb and flow, and we just have to work within’em and work through’em,” he said.

During its agenda conference Monday, the Pensacola City Council will hear a presentation from the Northwest Florida Homeless Reduction Task Force regarding a plan for the expenditure of $3 million from the American Rescue Plan Act funding to address the issue of homelessness in the area.

That may mean time is limited for the homeless encampment under a stretch of I-110 overpass near downtown that city council previously granted a moratorium from being kicked off the public property.

“Our whole goal would be being able to wind those things down and figuring out new and better solutions,” Mayor Robinson said.

The mayor said that he always considered the I-110 encampment to be “totally a temporary position” and that the people in that area would be better served elsewhere.

In addition to allowing the encampment due to the circumstances and stresses of COVID among the homeless community, city council members also cited the lack of available shelter beds in the area in their moratorium rationale.

Other than a drop in COVID numbers in the area — the summer Delta spike delayed this rollout a couple of months — Mayor Robinson did not offer any hints as to how the task force’s work might address other issues impacting the homeless community and triggering the moratorium, such as the lack of shelter space.

The mayor did mention that as the homeless camp has expanded under I-110, so has the number of complaints to city officials.

“It was just North Hill, probably the east side neighborhood, now it’s stretching into East Hill, all the way over to East Pensacola Heights that we’ve gotten complaints, so, yeah, we’re getting complaints,” he said.

Also, Robinson said, the city plans to move forward “fairly soon” with a parks greenway project in the area used by the homeless campers: “We’ve got plans for the whole Hollice T. Williams, so I’m ready to get moving and get this done.”

How Loud Is Too Loud?

In a separate workshop today, the city council will also be considering a noise ordinance for the city. Mayor Robinson — who dealt with this issue previously as an Escambia County commissioner — said governing sound is slippery business.

“The challenge is always going to be the enforcement and how you make it work, and there is no perfect way to do it,” he said.

Mayor Robinson reflected on his experience with the county — “when I was at the county we had a decibel meter, but it was far from being the end-all, be-all” — and suggested that perhaps the city could try enforcing noise regulations during certain hours.

“Noise is certainly something that happens in neighborhoods, and I’m sensitive to it, but it’s not as easy to find a fix on it,” he said.

But there will also likely need to be varying regulations for the city’s different neighborhoods. Downtown, for instance, may look a bit different than Scenic Heights.

“Certainly, to some extent, if you choose to live in an entertainment district, there are some things that you go with,” Robinson said. “I don’t think that gives you sort of unlimited — at some point, the part has to end, and people need to go. But there’s no doubt it needs to stay later; it’s an urban environment.”