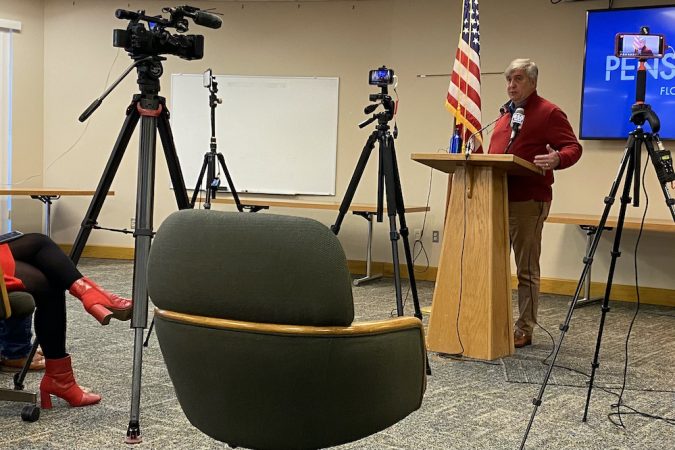 Pensacola Mayor Grover Robinson has some concerns about where the city’s charter review commission might be heading, following discussions in last week’s Pensacola City Council meeting.

“If you thought they were simply going to tweak the charter, I’m not so sure,” Mayor Robinson said Monday morning during his weekly press conference. “It seemed like there were several people who want to redo the charter totally.”

Robinson expressed concerns about the charter review commission flirting with rethinking the city’s strong-mayor form of government during the previous charter review process. The mayor said that the current form of executive-leaning government, instead of a more council-centric form, is more efficient and helped the city with “attracting and retaining talent.”

Accompanying Mayor Robinson for the press conference this week were three city staffers — City Administrator Kerrith Fiddler, deputy administrators Amy Miller and David Forte — who were present to relay “why they think this function, or this form of government, works in advantage for them to think about wanting to work here at the city of Pensacola.”

Fiddler spoke about how Pensacola is the first strong-mayor city he has worked for. His other five positions were in council-city manager municipalities, and he described those environments as less efficient.

“Trying to get things done can be very challenging,” Fiddler said, explaining how he could go “right next door” to speak with the mayor at any time, whereas meetings with council members would require numerous appointments.

Forte, who came to the city from his position with Escambia County, also praised the efficiency of the executive, pointing out the value of a “clear line of communication from the top down.”

“I can clearly state that during the two years that I’ve been here, compared to the 13 years previously with Escambia County, the efficiency, with the strong mayor form of government, and the productivity is almost night and day difference,” Forte said. “Having one individual to report to is much cleaner than maybe having seven or eight individuals to report to; it just makes it definitely more efficient, more effective.”

It was this productivity that Miller, who oversees the city’s enterprise operations, focused on. Miller has been with the city during both its current strong-mayor form of government and its previous council-manager form and said the current system has proven a “tremendous advantage to the city of Pensacola” and also “one of the reasons that we’re experiencing the growth and the vitality and the successes that we’re experiencing right now.”

“I think the system of government works. Can it be tweaked? Can you do things differently? Sure,” Mayor Robinson summed up, pushing for the review commission to stick to minor tweaks and leave the strong-mayor form of government unaltered.

Last week, the city council voted to conduct a feasibility study on implementing a road diet for Summit Boulevard. The road diet, which typically involves slimming or reducing vehicular lanes and adding spaces for pedestrians and cyclists, would reduce traffic speed in the area, which consists of residential streets, a community recreation center, and an elementary school.

“I temper the people at Summit with understanding how there are a lot of projects before that,” Mayor Robinson said Monday.

Though city council decided to spend $75,000 on the feasibility study, Robinson said the project would ultimately end up in line behind a growing list of other projects — “there are a lot of projects stacked up” — and while he agreed with points made during the city council meeting in favor of the project, he also wanted to be realistic about how fast a Summit Boulevard project could happen.

“I tried to temper at the meeting: I understand the idea, great idea, let’s look at it and let’s study it. Just understand, we have a lot of projects and a lot of roads that have been asking for things that are ahead of that,” Robinson said.

Some of the projects the city is working the Florida Department of Transportation on that would fall ahead of any Summit Boulevard project, Robinson said, include a $1.2 million road project for North Palafox, the two-waying of Davis and Martin Luther King.

Again this week, Mayor Robinson cautioned city council members as they contemplate a feasibility study concerning starting a municipal utility, repeating that the city could not afford to run a utility and would be better off sticking with its current month-to-month-in-lieu-of-a-longterm-franchise-agreement arrangement.

“I still remain confused on what the ultimate goal of where the council is going to go,” Robinson said.

The mayor said he understood “frustration” with rising power bills since FP&L recently took over from Gulf Power but contended that a municipal power company was the answer to higher bills.

“No matter what our anger is, I think we’ve got to ask ourselves, ‘Are we making good decisions?’” Mayor Robinson said. “I think oftentimes this certainly is emotional, but emotion does not lead us to good decisions. I think we have to look at things and evaluate and ask ourselves critical questions.”

For three years, the city has been negotiating a contract with Gulf Power, and now FP&L. Robinson said that unless an offer that’s advantageous for the town — addressing items such as the undergrounding of power infrastructure — is laid on the table, there’s no reason to seek a long-term agreement over the month-to-month arrangement.

“I think continuing to keep flexibility is the best thing that we can do,” Robinson said.