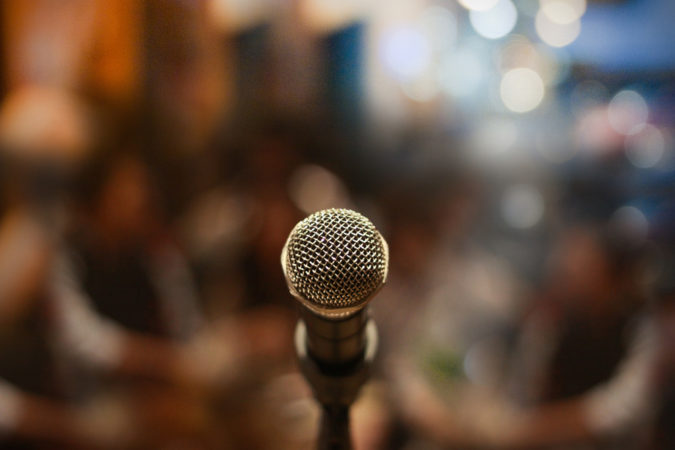 During his weekly press conference Monday, Pensacola Mayor Grover Robinson addressed a number of city issues — including ADA improvements and matters related to a fatal July police shooting — and also discussed his upcoming trips to Tallahassee and Washington D.C. to meet with officials at the state and federal levels.

Robinson acknowledged that he and City Administrator Chris Holley will be visiting D.C. next week during a particularly partisan era as impeachment inquiry efforts progress, but stressed that politics weren’t expected to interfere with the mission to press federal agencies for local needs.

When Mayor Robinson visits Tallahassee and Washington as the legislative sessions get under way, he will have a number of items on the checklist.

“We have a lot of asks that we want to talk about, some monetary, some non-monetary,” he said.

One of the issues Robinson plans to take to the state capitol, to Rep. Alex Andrade specifically, is the location of 5G communications infrastructure. Currently, companies can place the equipment in residential areas — with no ability at the local level to contest — but are not allowed to locate it on state infrastructure, like traffic light poles on state roads.

“We wanna to talk to him about small cel and how we look at co-location, certainly on FDOT poles, Gulf Power poles, anything that we can do that helps moves these things and help keeps poles from showing up in peoples yards, that’s what we’re going to keep doing,” the mayor said, adding that he would also discuss repealing the law that takes local control away where 5G infrastructure is concerned, but said he was “less optimistic that will happen.”

Another issue Robinson will take to Tallahassee concerns the funding of a multi-use trail along Scenic Highway. The trail, which would require funding from the Florida Department of Transportation, would go from East Scenic Heights to Nine Mile Road, where it would connect to trails heading farther north.

“We believe that would really be a connector, an ability to connect downtown, all the way through out to trails at UWF and out into Santa Rosa County for those people who bike and for pedestrians,” Robinson said. “We see that as a real amenity that can happen.”

The mayor will also be talking to FDOT about potentially funding work along Main Street downtown. The state committed money last year to study the issue, and it’s hoped this year they’ll make implementation funding available.

Robinson said that the city is looking to address drainage related issues along the corridor, and that it would make sense to also address the road work at the same time.

In D.C., Robinson said that he focus on issues such as state-level insurance issues; securing the remaining funding for the ST project; regional infrastructure needs; and a number of issues associated with the state and national level League of Cities organizations.

The Pensacola Police Department recently dismissed the officer that fatally shot a citizen during a July traffic-stop-gone-bad. The termination — for breaking the department’s use of deadly force policy — seems to indicate the incident might’ve been preventable if the officer had followed the policy; an internal PPD investigation, as well as a Florida Department of Law Enforcement investigation have not been made public ahead of the coming grand jury process.

Mayor Robinson said Monday that the city has been contacted by the attorney for victim Tymar Crawford’s family.

“I understand that they have reached out to the city and requested things,” Robinson said. “I know that [City Attorney] Susan [Woolf] has been working with that.”

Following the shooting, improved training for officers was touted as a key element to the city’s response. A partnership has been forged with the U.S. District Attorney, though there has been no movement on the training front as of yet.

Mayor Robinson said Monday that the city will begin focusing more on training issues when Chief Tommie Lyter — who has been away caring for his wife, who recently passed — returns to work. He said he also expects to focus on engagement efforts, attempting to create better relations between officers and the neighborhoods they serve.

“Clearly, we need to do a better job engaging without neighborhoods and understanding what we’re doing in policing,” Robinson said.

The mayor pointed to the return of bicycle-based patrols as one such engagement effort. He said that getting officers out of their patrol cars and into the neighborhoods would help foster better relationships with citizens.

Robinson also repeated his intent to reinstitute some form of citizen-led police advisory board — a request from community organization Dream Defenders — and also bring back a PPD liaison position based in the city’s neighborhoods department.

“In the past we had a liaison position within the police department, the last administration got rid of that position, I’m beginning to wonder if we should bring that back forward,” he said.

Also in the wake of the July shooting, the mayor said that the city would pay for any counseling that Crawford’s family — four children and a wife — might need. The man’s children were watching from the house when he was shot by PPD Officer Daniel Siemens.

Robinson said Monday that the city arranged for the family to be provided counseling services for up to one year through Lakeview Center.

“I was more than happy to cover the cost of that,” the mayor said.

However, Lakeview’s director reportedly informed the city that Crawford’s family had declined the services.

“She told me at the time that they had reached out to the family, but that the family was not receptive and looking to go any further,” Robinson said.

Sidewalk Improvements by the Numbers

The next sidewalk projects are slated for the urban core. Two are planned for this year, with three more coming in 2020.

“This is an ongoing effort to make our sidewalks ADA compliant so that we’ll be more accessible to all residents,” Robinson said.