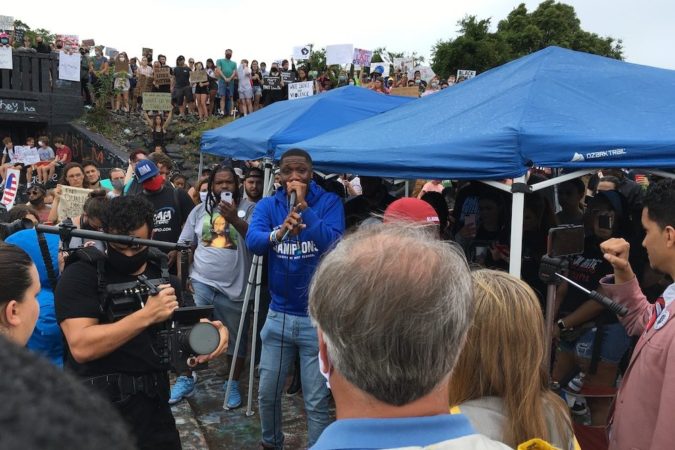 Protesters encamped near Graffiti Bridge are being told by city officials that they need to relocate to a different location. The protesters, however, appear to be disinclined to acquiesce the request.

“We will not be going anywhere,” said Kyle Cole, an organizer of the protests. “We have a plan, agenda, and until it’s complete we will be there.”

“We have a plan, agenda, and until it’s complete we will be there.”–Kyle Cole

The consecutive days of protests at the 17th Avenue site are stretching towards the two week mark. Like similar protests across the country, they began shortly after George Floyd, an African American man in Minneapolis, was killed in police custody.

On Monday, Pensacola Mayor Grover Robinson said that the protest would need to be relocated, suggesting a vacant lot near city hall.

“Obviously, there’s a lot of traffic challenges,” Mayor Robinson said Monday. “We realize that it’s got to move somewhere from there.”

The mayor noted that the city would allow the protesters to remain at Graffiti Bridge until mid-week, when Floyd is laid to rest.

“I indicated to Mr. Cole, if they need to stay there until Wednesday, that’s fine,” Robinson said.

But Cole feels relocating the protest at the city’s behest would only devalue the protest.

“It will take away from the message we have started for us to allow them to make us move,” Cole said on Tuesday.

Cole also said he was puzzled by the mayor’s request.

“They have not given us any problems up to now,” he said. “So why now?”

The mayor has cited “traffic challenges” near Graffiti Bridge as the rationale, but he’s likely referring to a very specific traffic challenge that occurred Saturday, when he visited the site and addressed the protesters.

Unsatisfied with the mayor’s remarks to the protesters, a smaller contingent led by Hale Morrissette, of the Pensacola Dream Defenders, blockaded the roadway at the foot of the bay bridge, landing one protester on the hood of a Ford Flex for a ride across the three-mile bridge.

The move also backed up traffic in all directions until Robinson went into the roadway to discuss the group’s list of demands. That action does appear to have snagged Morrissette a seat on the yet-to-be-formed police oversight board — though the mayor contends that would’ve happened regardless — but it looks like it also triggered a heavier-handed approach by the city.

2 thoughts on “Protesters: ‘We will not be going anywhere’”