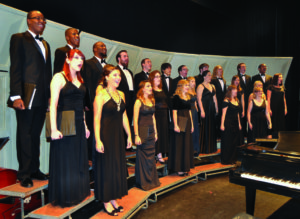 No tickets are required. Seating begins at 7 p.m.

Rounding out the show, the Entertainers Jazz Choir performs several popular selections, including Billy Joel’s “New York State of Mind,” Rodgers’ and Hammerstein’s “This Nearly Was Mine” and Mac Huff’s arrangement of “Can You Feel the Love Tonight.”