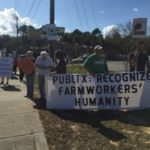 A documentary called Food Chains is shedding new light on the state’s largest supermarket chain and what part it plays in the poverty and exploitation of tomato pickers in Immokalee, Fla.

The film, which was shown locally at Carmike Cinemas Dec. 4, focuses around the efforts of the Coalition of Immokalee Workers (CIW) as they organize a hunger strike at Publix headquarters.

To date, twelve major retailers have signed on including Walmart, Whole Foods, Trader Joe’s and McDonald’s.

On Saturday, a couple dozen people held signs and passed out flyers on 9th Avenue by Publix. Johnny Ardis, a member of the Panhandle Fair Food Alliance, helped to organize the demonstration and is responsible for getting Food Chains to premiere locally.

“Most people have no idea where there food comes from or what kind of conditions it took to get the food to their plate,” Ardis said. “Hopefully people will take action to correct these problems.”
The Panhandle Fair Food Alliance organizes demonstrations at local Publix supermarkets about once a month.

“A group of us have been working on this campaign for the past three years,” Ardis said. “Earlier this year we decided to start a formal organization.”

The CIW says farmworkers make about 50 cents for every 32-pound bucket of tomatoes they harvest. That means a worker who harvests two tons of tomatoes in a single day would only make about $62.

“Publix and Wendy’s are the two main targets right now and we’ve picketed both,” Ardis said. “But since Publix is really located just in the Southeast, we figured we should put most of our energy there.”

Ardis said that after the picket, he will take about 150 signed letters to the manager. The letters urge Publix to partner with the CIW and join the Fair Foods Program.

Lou Brogna, one of the picketers at the demonstration, said that watching Food Chains Thursday motivated him into action. The retired union representative said that he’s been involved in farmworker issues since the ‘70s.

“According to Food Chains, an extra cent per pound of tomatoes passed on to the consumer would only cost the average family an extra 44 cents a year,” Brogna said. “If Walmart can do it, Publix can do it.”
Sarah Jonas, organizer and member of the Panhandle Fair Food Alliance, said that the crowd Saturday was much bigger thanks to the premiere of Food Chains.

“The film definitely brought awareness within the community,” Jonas said.