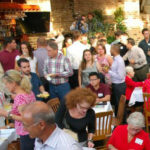 A hundred-plus people attended the August 5 Candidate Forum at Seville Quarter, hosted by PYP, the Greater Pensacola Chamber, and Seville Rotary. Pictures of the event can be found here on the PYP Facebook page.

After all the candidates spoke, PYP surveyed the audience – which included PYP members, community leaders and the public. Some of the candidates brought supporters with them – Ashton Hayward (mayor’s race), Mike Lowery (Commission District 4) and Dennis Tackett (Council District 2) did not attend.

Over 55 attendees turned in candidate surveys following the event, and the results have been tallied. There were some surprises.

In the County Commission races, Grover Robinson (District 4) and Doug Underhill (District 2) overwhelmed their competitors. Incumbent District 2 Commissioner Gene Valentino failed to get more than 15 percent of the votes.

The results on the mayor’s race showed that challenger Donna Clark is within reach of Mayor Ashton Hayward – with nearly one-in-five respondents unsure – although PYP members were more sure about Hayward that the rest of the room.

The Pensacola City Council races had incumbent Sherri Myers doing well inside her district against challenger Dennis Tackett, with 20 percent undecided. Brian Spencer could be in trouble. There weren’t enough District 6 voters in the survey to make the results for inside the city district valid, but overall he and challenger Mark Taylor are even with 17 percent unsure.

All the other races will end in November.