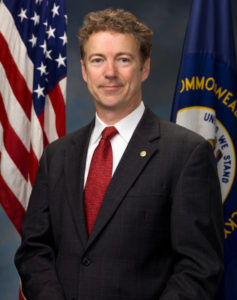 We got this press release from the Rand Paul campaign:

U.S. Senator Rand Paul (R-KY) today announced that he will seek the Republican nomination for President of the United States of America.

During his time in office, Rand Paul has vehemently fought to protect our Constitution, individual liberties, and the freedoms in which our country was founded upon. Rand Paul has taken his message of individual freedom across the United States in the hopes of making the Republican Party bigger, better, and bolder.

Time and time again, Rand Paul has proved that he is a different kind of Republican– one who can defeat the Washington Machine and unleash the American Dream.

Excerpts from Senator Rand Paul’s announcement speech can be found below.

EXCERPTS:
Partial Excerpts of Rand Paul’s Announcement Speech. A full transcript of his prepared remarks to come. Below are excerpts from his speech.

——————
We’ve come to take our country back from the special interests that use Washington as their personal piggy bank.

The special interests that are more concerned with their personal welfare than the general welfare.

The Washington machine that gobbles up our freedoms and invades every nook and cranny of our lives —— must be stopped!

————
Too often, when Republicans have won, we’ve squandered our victory by becoming part of the Washington machine.

————
Big government and debt doubled under a Republican administration and is now tripling under Barack Obama’s watch.
President Obama is on course to add more debt than all the previous Presidents in history–combined.

We borrow a million dollars a minute. This vast accumulation of debt threatens not just our economy, but our security.

————
The message of liberty, opportunity and justice is for all Americans, whether you wear a suit, a uniform or overalls, whether you’re white or black, rich or poor.

—————-
Congress will never balance the budget unless you force them to do so.

Our only recourse is to force Congress to balance the budget with a Constitutional Amendment!

—————–
I ran for office because we have too many career politicians.

I want to reform Washington. I want common sense rules that will break the log-jam in Congress.

That’s why I introduced a Read the Bills Act.

The bills are thousands of pages long. And no one reads them. They are often plopped on our desks only a few hours before a vote.

———————–
Many Americans, though, are being left behind. The reward of work seems beyond their grasp. Under the watch of both parties – the poor seem to get poorer and the rich get richer.

Politically connected cronies get taxpayer dollars by the hundreds of millions, and poor families across America continue to suffer.

————–
Liberal policies have failed our inner cities. Our schools are not equal and the poverty gap continues to widen.

Martin Luther King spoke of two Americas. He described them as “two starkly different American experiences that exist side by side.”

My trips to Detroit, Appalachia, and Chicago have revealed what I call an ‘undercurrent of unease.’

I want all our children to have the same opportunities that I had. We need to stop limiting kids in poor neighborhoods to failing public schools and offer school choice, not just for the privileged, but for everyone!

It won’t happen, though, unless we realize that we can’t borrow our way to prosperity.

In my Vision for America, Freedom and prosperity at home can only be achieved if we defend against enemies who are dead-set on attacking America.

The enemy is Radical Islam and not only will I name the enemy, I will do what ever it takes to defend America from these haters of mankind!

But we also need a foreign policy that protects American interests and encourages stability — not chaos!

I envision an America with a National Defense unparalleled, undefeatable, and unencumbered by overseas nation building!

I envision a National Defense that promotes, as Reagan put it, ‘Peace through Strength.’

I believe in applying Ronald Reagan’s approach to foreign policy to the Iran issue.

Successful negotiations with untrustworthy adversaries are only achieved from a position of strength.

We brought Iran to the table from strength, through sanctions I voted for.

Now we must stay strong. That’s why I co-sponsored legislation that insures that any deal between the US and Iran must be approved by Congress.

Not only is that good policy, it is the law.

I will oppose any deal that does not end Iran’s nuclear ambitions and have strong verification measures. I will insist that any final version be brought before Congress.

The difference between President Obama and myself-he seems to think you can negotiate from a position of weakness.

——————–
We must realize, though, that we do not project strength by borrowing money from China to send it to Pakistan.

Let’s quit building bridges in foreign countries and use that money to build some bridges here at home!

It angers me to see mobs burning our flag and chanting death to America in countries that receive millions of dollars of our foreign aid.

I say it must end. I say not one penny more to these haters of America!

Today begins the journey to take back America, to rescue a great country, now adrift.

If you love liberty, Stand with me!

If you want to defeat the Washington machine, Stand with me!