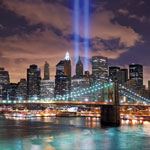 In commemoration of the Sept. 11, 2001 tragedies, Naval Air Station Pensacola held a ceremony at the Naval Aviation Memorial Chapel aboard the base at 8 a.m. Tuesday immediately following morning colors. NASP Commanding Officer Capt. Christopher Plummer was the guest speaker for the event, which included the traditional “Two-Bell Ceremony,” a 21-gun salute and the playing of “Taps” performed by the NASP Honor Guard.

Last year on the 10th anniversary of the terrorist attacks, we published Remembering 9/11, which included the reflections of locals and national leaders. We also published Edwin Banacia’s memories about the planes crashing into the Twin Towers and the building’s collapse – We Will Never Be The Same.