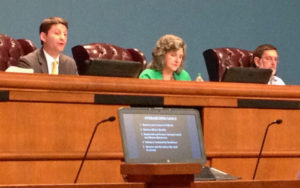 “I see the stickers,” Justin Ehrenwerth told the standing room-only crowd. “That’s something that we really embrace, that concept. And we like the buttons.”

The restoration council was established by the RESTORE Act, which outlines a structure to allocate funds realized via Clean Water Act penalties resulting from BP’s 2010 oil spill in the Gulf of Mexico. The council’s Pensacola date was the first in a series of meetings along the Gulf Coast to get feedback on the recently released Draft Initial Comprehensive Plan: Restoring the Gulf Coast’s Ecosystem and Economy.

The draft plan is meant to provide a framework for using RESTORE money—the RESTORE Act calls for 80 percent of the Clean Water Act penalties to be used for restoration efforts in the Gulf Coast states—to implement a coordinated, region-wide restoration effort. A final plan is scheduled to be released in July.

Most of the members of the public who spoke during Monday’s meeting expressed support for the council’s draft plan. They voiced appreciation for the plan’s environmental focus and encouraged the council to establish scientific advisory committees, as well as to take advantage of the existing ecological data resting with various agencies.

Several people also told the council that RESTORE efforts should focus on the health of area waterways. Christian Wagley, who holds the environmental seat on the Escambia County RESTORE Act Advisory Committee, said the council should “place the highest priority” on projects that addressed water health.

For more on the Gulf Coast Ecosystem Restoration Council, or to read and comment on the initial draft plan, visit http://www.restorethegulf.gov/.