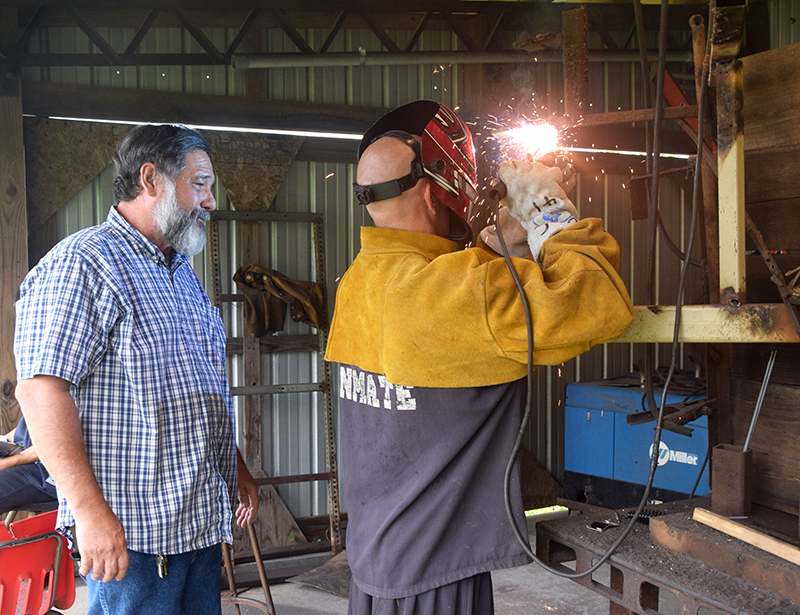 When Welding Instructor Danny Cain hands certificates to Escambia County Road Prison inmates who have completed the welding program at the prison, it’s not unusual to see tears begin to run down their cheeks.

The certificates inmates earn while incarcerated are much more than just pieces of paper – for many, they represent opportunities to build a better future outside of prison.

“It gives them a sense of accomplishment, and they know they can do something if they want to,” Cain said. “And that builds character in a person – that builds morals in a person. And a lot of them get out of here and do the right thing, get out and work.”

Cain began teaching at the Escambia County Road Prison in 2010 with George Stone Technical Center, offering nationally-recognized certifications including stick welding, pipe welding, MIG and TIG welding, or metal inert gas and tungsten inert gas. He typically teaches 12-14 students at a time, all of whom choose to opt into the program during their time at the road prison.

And with a growing number of success stories, Cain said he doesn’t have any problem filling up the class.

Cain stays in frequent contact with at least 14 of his students from the past two years who are now working in the welding field, and another 10 former students are recently released and seeking employment. Of the 56 inmates who have participated in the welding program since 2015, just five have been rearrested.

Former inmates and students in the program are now working everywhere from Oklahoma City to New Orleans, using their new skillset to advance in the welding industry.

Brian Mills, who spent about five months at the road prison in 2013, said he largely credits Cain and the welding program for the opportunities and success he’s found since getting out of prison. With more than 60 felonies on his record, Mills said he did not have much hope for his future career – but receiving his welding certifications changed that.

“When I got out of prison, I didn’t have anything at all, and [Cain] lined me up a job here in Louisiana,” Mills said. “I came over here and started at the bottom, and I just purchased a brand new built house in a brand new subdivision. I’m doing very, very well.”

Having the skills to be able to secure job opportunities after their release is critical for those who have been incarcerated, Mills said. Unlike some other prison educational programs that have long waits and may require months or years to complete, Mills said it’s helpful that some of the welding certifications can be completed by those who aren’t incarcerated for lengthy periods of time.

“For the county to have that program where they’re doing a short amount of time and they’re able to get a bit of welding underneath them, it’s very helpful,” Mills said.

Road Prison Commander Charles Snow said he’s seen firsthand how the welding program can positively impact lives, also stressing the importance of having a solid set of skills to be able to reenter the workforce after incarceration. Snow said that Cain goes above and beyond to help connect his students with good jobs, whether it’s local or out of state.

“They have a job to go into, they have a profession where they can actually prepare a good wage,” Snow said. “So it’s life-changing.”

Cain said it’s the life-changing impact of the program that keeps him going every day. He often receives letters and Facebook messages from former students, and he loves hearing their stories about working, providing for their families and positively contributing to society.