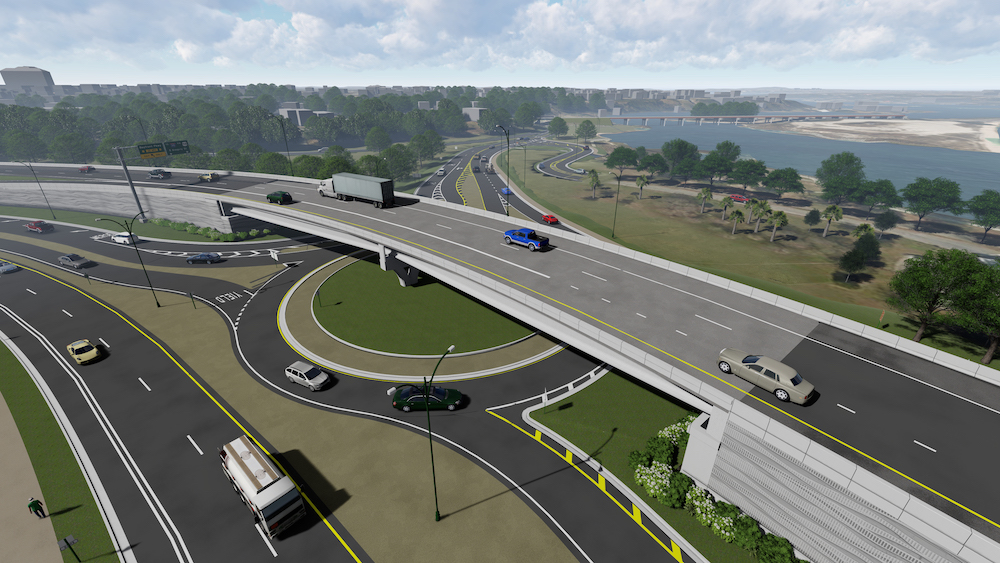 Designed with traffic flow and safety in mind, the planned roundabout at the foot of the Pensacola Bay bridge will dramatically alter the existing landscape. No longer will drivers wait at a traffic signal at the intersection of 17th Avenue and Bayfront Parkway, but will rather circle their way toward the preferred route via a roundabout.

The Florida Department of Transportation presented a peek at the planned roundabout project Tuesday evening at Pensacola’s Studer Community Institute. In addition to artist-renderings placed around the lobby, there was also a short informational video explaining exactly what to expect from the interchange project.

“This is part of the Pensacola Bridge Project as a whole,” explained Ian Satter, public information officer for FDOT, District 3.

Currently, drivers approaching the Pensacola Bay bridge from Bayfront Parkway or 17th Avenue wait at a traffic signal to either get on the bridge or make a turn towards either downtown or Graffiti Bridge. Drivers headed in from Gulf Breeze and exiting the bridge, meanwhile, simply continue straight on Bayfront, veer right towards Gregory Street or turn up 17th Avenue.

The bridge’s flyover will consist of three 11-foot lanes for westbound traffic. The roundabout underneath the flyover will have a single 15-foot wide lane.

Satter said he thinks drivers will ultimately appreciate the addition of a roundabout, which he said should improve both safety and efficiency.

“I think the thing about roundabout, some people are just not accustomed to them,” he said.

Satter also noted that the addition of the roundabout should have the added benefit of helping to reduce the number of large trucks choosing to traverse up 17th, where they sometimes run afoul of the low-clearance Graffiti Bridge, or train trestle. Truck drivers, he said, typically will choose another route to avoid using a roundabout; trucks can, however, still head up 17th sans roundabout by using the bridge’s exit lane to the right.

During construction, FDOT is advising drivers to expect temporary lane shifts and detours. There will also be lane closures, but such closures should be confined to nighttime hours, from 8 p.m. to 5 a.m.

While this interchange project has been in the works for a while and is set to begin soon, FDOT is still taking public comment on the project for two more weeks. Comments can be emailed to Jack.Harrison@dot.state.fl.us