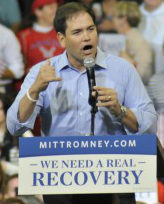 I got his email from U.S. Senator Marco Rubio (R-FL):

The federal government has a spending problem. Simple math shows it to be the root cause of our nation’s fiscal crisis. Yet when it came time to present a bill to address this crisis, not a single spending cut was included in the proposal.

Instead, the bill contained a new tax hike that will impact more than just the wealthy. It will also hit thousands of small businesses, many of which may have to lay off employees in order to bear this new burden.

While I appreciate the hard work my colleagues put into seeking a solution, this bill is not a responsible answer to our problem. We need a long-term solution that addresses the root cause of the crisis rather than simply attempting to cover the symptoms.

In each year of President Obama’s first term he added over a trillion dollars to our now $16 trillion debt. Politicians in Washington treat our deficits and debt as if they are comprised of toy cash rather than actual money that our children will have to pay back.

If America’s families and businesses can’t afford to operate so irresponsibly, why should we allow our federal government to do so?

Imagine if the president was required to count last year’s $1.1 trillion deficit by hand out of a cash register. If he were to do so at a rate of one dollar per second, it would take him nearly 35,000 years to complete the task.

Our country can’t wait that long to learn that we’re spending too much money. America needs action from its leaders today.

I pledge to keep fighting for substantive, long-term solutions to our problems. It’s the right thing to do for Florida, my country, and for my children and grandchildren.

Thank you for standing with me in this effort.