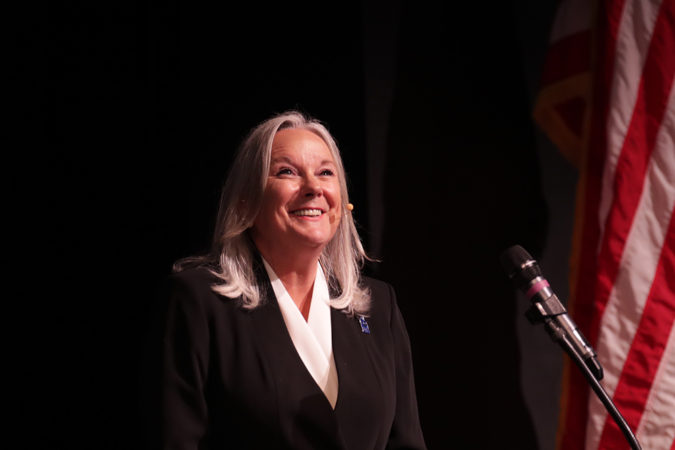 PENSACOLA: University of West Florida President Martha D. Saunders reflected on a year of extraordinary accomplishments before turning her attention to “big goals” during her 2019 State of the University address on Friday, Sept. 27.

Saunders noted that UWF placed top two in the Florida Board of Governors performance-funding model, scoring its highest point total in the six-year history of the metrics and finishing one point behind the University of Florida. UWF improved in each of the 10 metrics, highlighted by significant improvements in 4-year graduation and student retention rates.

“Nobody did this alone,” Saunders said. “Every single thing we do that matters at all, is a collaborative effort.”

Saunders pointed out that U.S. News & World Report awarded the University four Best Colleges award badges as symbols of excellence for ranking among the top regional universities in the South in the following categories: Regional Universities; Top Public Schools; Social Mobility; and Best Colleges for Veterans.

Saunders also highlighted the University’s accomplishment of expanding its downtown presence in her address. The UWF Center for Cybersecurity relocated in the spring and now operates out of a state-of-the-art facility in the Studer Community Institute Building. The Center for Global Online Learning and Development also established a presence in downtown Pensacola.

Saunders said UWF is primed to carry the momentum over to the new academic year. Her goals include continuing to improve the University’s 4-year graduation and student retention rates, along with increasing community efforts.

“We don’t need to stick close to shore. We can take on the big sea,” Saunders said. “We are not afraid to set big goals. The day before any major breakthrough, it was just a crazy idea.”