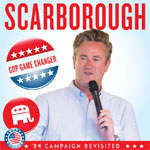 Former Congressman, once Publisher emeritus for Independent Florida Sun, and current co-host of “Morning Joe” Joe Scarborough may consider a run for Bill Nelson’s U.S. Senate in 2018. On the Hugh Hewitt Show, Scarborough said that he has ruled out a presidential run next year, but he left his options open for 2018.

“I’ve always said that, at some point, I wanted to get back into public service,” he told Hewitt, “and hopefully I can do it while a Republican is in the White House.”

Scarborough said that he has kept a residence in Florida. “It feels more like home every day.”

Who would be Scarborough’s opponent for the GOP nomination? The Miami Herald thinks it could be Gov. Rick Scott.