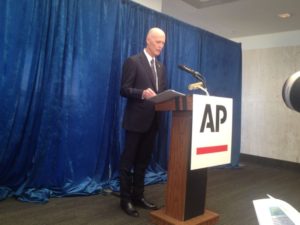 Gov. Rick Scott’s administration is balking at a request from the federal government to resettle hundreds of Syrian refugees in Florida.

In an email Tuesday, Patti Grogan, director of refugee services at the Florida Department of Children and Families, told the U.S. Department of State that the governor had been dissatisfied with what he heard in a recent White House conference call on the situation.

More than 51,000 people — including at least 100 Syrians — received refugee services in Florida over the last 12 months. In November, after President Barack Obama’s announcement that the U.S. would take in an additional 10,000 Syrian refugees, the federal government moved to relocate an additional 425 of them to Florida. That number has since been revised to 518.

But due to Scott’s concerns, Grogan said, the state would not support the additional requests “to an already burdened system” without alleviation of concerns about the vetting process, disclosure to the Florida Department of Law Enforcement background information about each refugee and time for FDLE to review each refugee.

There are nine resettlement organizations nationwide, with 25 local affiliates in Florida. The groups work with the federal and state governments to find placements for refugees.