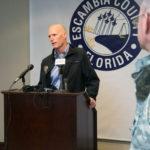 Making good on a campaign promise, Gov. Rick Scott announced Monday he will ask lawmakers to provide the highest per-student funding for education in state history during the legislative session that begins in March.

Scott said his “Keep Florida Working” budget would include $7,176 per student, about $50 above the previous high in the 2007-08 budget year. That spending plan was approved before the financial crisis that caused the worst economic downturn since the Great Depression.

“Our historic funding proposal of $7,176 per student will provide our schools the resources for our students to have the very best opportunity to succeed because we know the workers and leaders of tomorrow are in our classrooms today,” Scott said in a prepared statement. ” … These record investments will continue to equip our students for the jobs of tomorrow and help us on our path to be the number one destination for jobs.”

The proposal would mark an increase of roughly $261 from the current budget year, which ends June 30. But it still has to survive a legislative process in which lawmakers will be eager to fulfill their own priorities. So far, legislative leaders have been noncommittal when asked specifically about meeting Scott’s targets for education funding and a portion of the $1 billion in tax cuts he promised over two years.

“FEA applauds the governor for keeping his campaign promise and increasing the state’s budget allotment for public school students,” Florida Education Association President Andy Ford said. “We look forward to working with the governor and the Legislature to continue to invest to improve our local public schools and helping all of the students who attend them.”

Overall, funding for public schools would rise by $842.5 million, to almost $19.8 billion. The state’s share would increase to a shade over $11 billion, meaning about $400 million of the new funding would come from the state. Local taxpayers would pick up the rest.

“We need to do a whole lot more than that, because coming to Florida to live is more than about lower taxes and warm weather,” she said. “It’s about the quality of life that you will have and the type jobs that we will offer these people.”