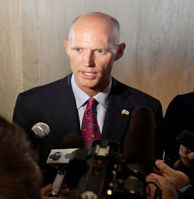 This year, they had not impediments and flexed their muscle. Scott was almost giddy when he read his prepared statement: “I am proud that the first bill I sign is this important legislation that will give Florida the best educated workforce to compete in the 21st century economy. We must recruit and retain the best people to make sure every classroom in Florida has a highly effective teacher.”

Republicans and conservatives applaud the new law for rewarding excellent teachers and believe that it will attract high quality teachers to move to the state.

Former District of Columbia Superintendent Michelle Rhee: “This landmark bill recognizes that teachers are the most important factor in schools when determining a child’s success.”

CFO Jeff Atwater: “Exceptional teachers will now be distinguished, celebrated and rewarded for their dedication and skill to impart knowledge that inspires our students.”

State Sen. Stephen Wise (R-Jacksonville, who sponsored the Senate version of the bill: “Our teachers are incredibly influential and important to the success of our children and our future as a State. I believe this bill will attract top-quality educators to Florida and foster a student-centered, world-class education system.”

State Rep. Erik Fresen (R-Miami), who sponsored the House version of the bill: “This is a momentous occasion for our state’s education system. Excellent teachers are the driving force behind student success and this bill provides for a system that recognizes those highly effective educators and rewards them appropriately.”

Wise has also proposed a bill that would require public school teachers to the teach an alternative he calls “non-evolution“—-which I’m sure would attractive the best science and biology teachers in the country to move to Florida.