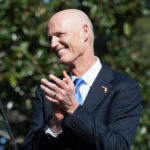 Q: Is it true that Gerald Bailey (FDLE Commissioner) was forced to resign?
Prior to December 16, 2015, the Governor’s staff notified cabinet staff (including the offices of the Attorney General, the Chief Financial Officer, and the Commissioner of Agriculture) that the Governor wanted new leadership at FDLE. Cabinet staff raised no objection.

Bailey sent a letter to the Governor saying he was “stepping down” that same day, December 16th.

Q: Is it true that you or your aides instructed FDLE to identify Alan Williams in a daily media report about the Dream Defender protest at the capitol?
The Governor’s office, FDLE and DMS worked to produce daily media reports in response to a high volume of media requests for information (including the costs of the protest, activities of protestors and incidents in the capitol during the protest).

Representative Williams was first identified by name in an incident report memo from Gerald Bailey emailed to the Governor’s office on Tuesday, July 23, 2013 at 4:40 pm and then included in a memo to press at 4:57PM that same day.

During the protest, it was standard practice to provide as much information to the media as possible without compromising the security concerns of the capitol building.

The discussions with Bailey were about how to provide the most complete account of who could have been involved in the high-profile escape of two inmates, which included both the Clerk’s Office and the Department of Corrections.

The discussion was not about targeting any individual.

While there is no record of an appointment application in the Governor’s office, it is likely he was considered for an appointment at some point because there was a request for a background check. However, there was no request to FDLE to influence any kind of investigation.

Q: Is it true that FDLE was forced to transport staffers from your re-election campaign in state vehicles?
The campaign paid an invoice from FDLE for the estimated cost of staff to travel with the Governor and the First Lady.

FDLE would not transport Meghan Collins on one occasion, which created some confusion because the campaign was already working to reimburse any cost to the state for staff travel.

Q: Is it true your campaign solicited donations from FDLE on their state emails?
Any emails used for campaign donations would have been obtained through lists operated by organizations that included individuals who opted in for communication. Unfortunately, those lists were not regularly cleaned to ensure they did not have any government email addresses on them.
The law requires mass emails to include an unsubscribe link that would have allowed any recipient to automatically be removed from a list at any time.

Q: Is it true that Pete Antonacci requested FDLE to delete public records?
No.

Q: Is it true that campaign aides asked for FDLE to help develop campaign policy by getting on a phone call?
FDLE did the right thing by ignoring a campaign staffer’s inappropriate request for assistance.

Q: What about the allegation from Bailey that your administration forces agencies to make certain hiring decisions?
Our office frequently makes suggestions on qualified candidates, but we do not require agencies to hire anyone.

Q: What about the allegation from Bailey that the Governor’s office stopped FDLE from briefing the cabinet on their plan to increase pay for crime lab employees?
In October, the Governor’s Office of Policy and Budget advised FDLE to not include any pay increases in their Legislative Budget Requests because pay increases for all state agencies were to be considered as a whole at a later date. The Governor’s full budget proposal will be released next week.