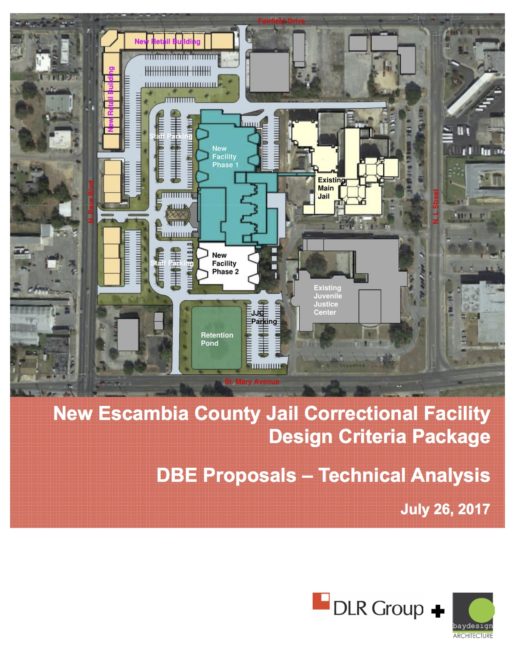 Today, the Escambia Board of County Commissioner will score the two jail designs presented to them on Monday. A technical advisory has already done it.

The technical review team consisted of the following 12 individuals:

In general, both DBE submittals were found to be complete, with only some minor omissions and inconsistencies in the overall response of the proposal. It was apparent that both teams invested a significant amount of time preparing the documents for the submission and were found to be generally responsive to the overall Design Criteria.

However, both teams deviated from the conceptual floor plans in several areas in what appeared to be efforts to reduce the overall volume of space in the building, resulting in potential savings on construction costs. These types of deviations were expected and in some respects encouraged, as a method to either reduce overall construction costs, propose different operational intents, or improve on the overall delivery timeline.

In addition to the internal DCP team meeting, an additional meeting was held on July 20, 2017 with representatives of the Escambia County Corrections and Facilities Department to review our evaluation comments and to determine if there were additional and/or major difference of opinion compared to the DBE team evaluations. . The results of this meeting can be found in the attached meeting minutes.

The WG-Caddell proposed design solution relocates the medical services to the second floor while reducing the overall volume (floor-to-floor height) of each floor of the facility. The volume of the first floor housing is adjusted vertically to align with the new second floor height. Juvenile housing remains in its original location. Overall, no proposed operational changes were perceived to have occurred with the suggested floor plan modifications.

The Yates proposal contained an operational approach which relocated the Juvenile Detention housing from the third floor to the first floor. The assumption made by the Yates team was that the juveniles would be better served on the first level of the building to minimize movements within the facility This approach required the relocation of the Segregation unit and Classification housing unit to a new 4th floor. This approach would create a significant movement of inmates since these two housing units were no longer adjacent to Intake area.

It is also believed that the creation of a 4th level for Segregation and Classification housing would create the need for additional staffing positions on the added floor. The creation of these additional correctional officer posts could cost the county millions of dollars over the lifespan of the facility. A more detailed analysis of the operational differences can be found later in this report.

It is the opinion of the DCP review team, that the WG-Caddell team’s proposed architectural design is a superior solution, based on the operational intent and proposed staffing implications than the Yates team proposed design.