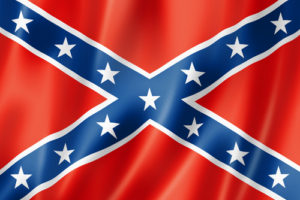 Without a formal vote, the Florida Senate on Monday agreed to strip the Confederate battle flag from its official seal, removing one of the few remaining vestiges of the infamous icon in state government.

After some hesitation when the change first came up, senators — back in Tallahassee for a redistricting special session — agreed without objection to adopt a new rule removing the controversial emblem from the chamber’s insignia. Approving the change without objection avoided the need for even a voice vote on the emotional issue.

Under the rule approved Monday, the seal would still include other non-American flags that flew over Florida, including the 1513 Spanish flag, the 1564 French flag and the 1763 flag of Great Britain. The United States flag would also remain, while the Florida state flag would replace the Confederate banner on the marker.

Senate President Andy Gardiner, R-Orlando, and Senate Minority Leader Arthenia Joyner, D-Tampa, requested in June that the Senate Rules Committee consider whether to change the seal amid a national backlash against Confederate symbols after a man with white supremacist views opened fire at an African-American church in Charleston, S.C., killing nine people.

Since then, Southern states, including Florida, have wrestled with how to reconcile past commemorations of “the lost cause” with shifting feelings about race and the meaning of the Civil War.

While many Southerners view displays of the Confederate banner as recognition of their ancestors’ military service and sacrifice, blacks and others interpret government use of the flag as an endorsement of the brutal, slave-driven economy that was a central issue in the war, which raged from 1860 to 1865.

“I’m glad that we are taking it down and recognizing the Confederate flag for what it is,” Sen. Oscar Braynon, a black Democrat from Miami Gardens, said after the session. “What it is, is a symbol of a time when this country went to war to keep my ancestors in slavery.”

Senate Rules Committee Chairman David Simmons, R-Altamonte Springs, defended the proposal on the floor of the Senate by pointing to U.S. Supreme Court rulings rejecting the legality of the decision by 11 Southern states to secede from the Union during the conflict.

“The flags on the current seal appear to presume to represent sovereign nations. However, our research established that the Confederacy was never legally a sovereign nation,” Simmons said.

No one openly objected to the change of the Senate seal during the debate. However, Sen. Rob Bradley, R-Fleming Island, said he wasn’t aware that the chamber was going to take up the issue during the special redistricting session.

Bradley also raised questions about whether the Senate should look at other options for the seal, including an overhaul of the symbol that goes beyond simply replacing one flag.

“If you look at all the flags on the seal, I think you would find that there were things that occurred in the name of some of those flags that history has now looked upon as being abhorrent and terrible,” he said.

But Gardiner defended moving forward with the changes now, saying it would take time to remove the old seal from various places around the Capitol. Bradley’s concerns, and questions from other senators, initially caused Senate leaders to pull back from the change before moving ahead with it later in the day.

Perhaps because of that, Gardiner told reporters after Monday’s session that the seal could be altered again.

“I think the understanding working with Senator Simmons is, he’s going to work with the members, and the seal may change some more,” Gardiner said.