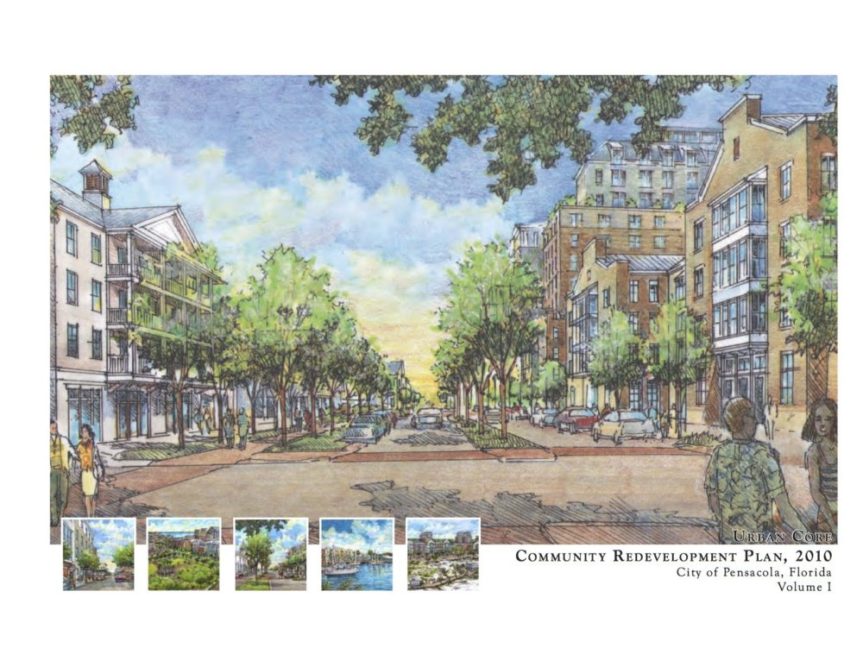 In the past, I expressed to many of you my support for the Pensacola Fish Hatchery Project at Bruce Beach.  At the time I supported the project, I did not nearly know as much as I do now about what makes communities grow and thrive.  Since resigning from Studer Group I have become a full-time community volunteer.  In that capacity I have spent a great deal of time studying other cities and listening to subject matter experts on how to create vibrant communities.  Based on this enhanced perspective, as well as the changing dynamics in our area, my opinion on the hatchery project has changed.  In this letter I would like to share with you the reasons I no longer support the proposed Pensacola Fish Hatchery Project at Bruce Beach.

Originally proposed in 2011 as a way to jump start development and jobs in the Community Redevelopment Agency (“CRA”) area, the Hatchery seemed like it could be a catalyst for additional development in the urban core.  When the council approved a 30-year lease in 2014 by a one-vote margin, no one could have imagined the changes that have come to our CRA urban core.  Based on the growth and progress in the CRA, a more intentional review of the CRA’s 2010 Urban Core Plan, a better personal understanding of other hatchery locations, and my understanding of what steps are required to create a vibrant community, I have reconsidered my earlier support of the project.  At this point in time, I urge you to exercise your right to terminate the lease with the Florida Fish and Wildlife Commission, seek an alternative Pensacola location for construction of the hatchery, or pass on the hatchery entirely.  I am writing to you to explain the rationale for my change of heart, and to encourage you to take a fresh look at the future you envision for the CRA District.

Perhaps the most compelling reason to reconsider this project comes from more closely reviewing the 2010 Urban Core Plan (the “Plan”). The Plan is the third iteration of the Urban Core Plan and establishes the framework for transformative policies and investments in the Community Redevelopment Area. Within that context, the plan provides policy, programmatic, and fiscal direction for the CRA as Pensacola reshapes its urban landscape and waterfront.

One of the elements of the Plan identified “Key Principles.” These principles lay the foundation for development of the CRA Plan and specific CRA initiatives. The Plan specifies that CRA initiatives should seek to achieve one or more of these principles, mutually, with no individual principal being achieved at the sacrifice of another. The key principles also provide a basis for decision making as general development plans are implemented under specific site conditions. The Key Principles identified are:

Like many others, I do not believe construction of a fish hatchery achieves more of these priorities than it distracts from.  This is particularly the case when you contrast the current construction plans for the hatchery with the renderings from the Plan of what Bruce Beach could look like as part of a “Pensacola Baywalk” public amenity: 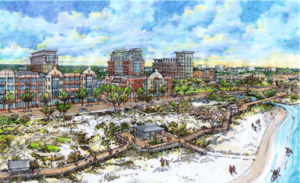 A rendering of a redeveloped Bruce Beach & Pensacola Bay with unfettered public access ample room for picnics and recreational uses. as proposed in the CRA Urban Core 2010 Plan.

Additionally, it appears the CRA recently contracted with a new entity to review, amend, and update the Plan.  It would be prudent to wait for an update from the experts studying the Plan before committing a key waterfront asset to an industrial/aquacultural use for the next thirty years.

Critics may suggest this position change is based on our ownership of the former ECUA treatment plant property north of Bruce Beach.  This criticism only serves to validate the likely negative impacts to that property—and surrounding properties– from a fish hatchery.  The criticism also confirms that the fish hatchery is inconsistent with the type of development the CRA seeks to attract within the district.  If the hatchery fulfilled the promise of the Plan by creating better public water access, promoting residential development, and strengthening neighborhoods—the public would not be questioning the appropriateness of moving forward.  Conversely, the proposed fish hatchery seems to be a much better fit for an adaptive use of the Port of Pensacola.  The Port of Pensacola property is expressly excluded from the CRA District.

ECUA Redevelopment is perhaps the most potentially transformative opportunity for the Urban Core CRA. With the size and location of the property, a significant high-density development is possible. The development program prepared by LRK shows a build-out scenario totaling 1,535 residential units on the subject property and other adjacent property owned by the City of Pensacola. While the build-out scenario is in line with Zimmerman/Volk’s residential absorption projections for downtown, RKG believes that market limitation may make this level of development challenging and perhaps unachievable in the near future. However, the higher density development pattern that is recommended at this location is appropriate and desirable and thus may take many years to complete.

While people can certainly debate the merits of a fish hatchery versus a Bay Walk and waterfront public park as the highest & best use for Bruce Beach, in the context of the CRA as a whole, it is indisputable that placing an aqua cultural operation between “the most potentially transformative opportunity” in the CRA district and Pensacola Bay is a bad idea. Until the questions surrounding the proposed hatchery are answered; i.e., traffic, uses, and odors associated with its operations, it is unlikely any developer will move forward with plans to redevelop the ECUA property.

Downtown development is clearly lopsided in favor of the east side to the detriment of the west side. New development and infill continues to proliferate to the east of the Community Maritime Park.  For instance, in the time since the fish hatchery was originally proposed, the following developments have transformed the eastern part of the CRA:

-Completion of One-51 Main by Beck Partners

-New Headquarters for the IHMC on Romana Street

Our philosophy on development of the ECUA site is consistent with our philosophy and experience developing in the eastern portions of the CRA. While we would like to recapture what we have invested, our real return on investment is watching the community grow and thrive.  Based on our experience in Pensacola and watching other communities, the location of the hatchery in the CRA will be what dictates the future of the western side of the CRA.  Based on what has happened in the past several years, and what the community now believes is possible, a fish hatchery will not help advance the ball, but rather stop progress.

In business, as in life, we do not get many opportunities for second chances.  Locating the sewage treatment plant on the waterfront in the 1960’s impacted every development decision made in that area for a generation.  The decision to build an experimental fish hatchery for a potential community waterfront amenity will impact every development decision made in the western part of the CRA for the next thirty years.  Unlike situations in the past, as a result of the developers delay you have an opportunity to reconsider this decision.  It took approximately fifty years before the sewage treatment plant  decision could be reconsidered.  In this instance, I think you, as our leaders, would be remiss if you did not “press pause” on the fish hatchery project, listen to the public, and seriously consider whether or not this is the highest and best use of Bruce Beach.

This is not to suggest there is no place for the hatchery in our community, only that based on these unique circumstances we should carefully consider whether or not the hatchery meets the priorities identified in the 2010 Urban Core Plan, or whether we should negotiate to locate the hatchery to a more appropriate location—like the Port or other industrial location.

Thank you for taking time to consider these thoughts, and thank you for your service to our community.