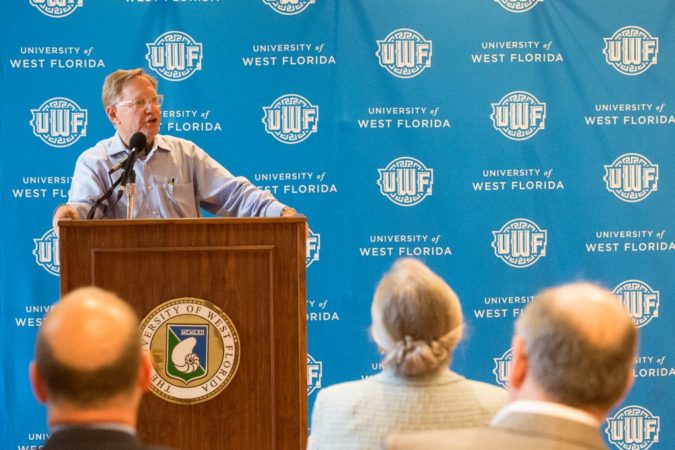 Nearly two years after Pensacola Mayor Ashton Hayward rejected the Studers’ lease agreement to build a conference center and the UWF Center for Entrepreneurship at the Community Maritime Park, the couple may have found a place for community-oriented space that could accomplish some of their goals:

Local entrepreneurs Quint and Rishy Studer are making another investment in downtown Pensacola. Today the couple announced their intent to buy the building at 220 West Garden Street, known as the SunTrust Building.

Quint Studer said that he and Rishy had been hoping for years to create a community-oriented space where citizens can gather, share ideas, and solve issues to create a better quality of life.

Studer had brought forth the idea of a lecture hall and conference center with his 2015 proposal to bring the UWF Center for Entrepreneurship to the Community Maritime Park, but that offer was rejected by the City.

Since that time, the Studers have traveled, researched, and engaged architects to look at other examples of multi-use community facilities.

After exploring several options for building this new facility in downtown Pensacola, the Studers turned their attention to the SunTrust building. They moved quickly once they investigated the building, which is currently vacant in the bottom two floors.

“For the past several years, we haven’t lost sight of the need for an open, community-focused space where people can gather to learn, socialize, and enjoy a concert or a show, or hear a great lecture,” said Quint Studer.

The building boasts a large first floor atrium which could be used as a social area and cafe, as well as a large office suite that could be used for concerts, lectures, and conference breakout sessions. Studer also cited the outdoor plaza as a place for community gatherings, musical events, and small festivals.

Not lost on the Studers was the large ten-story exterior wall of the building, a perfect place for screening outdoor movies, digital art, or other seasonal light displays.

While the building purchase is still in the contract stage, Studer said he expects no problems before closing the deal. “We have researched this property quite a bit, as have others. There are already a good group of tenant businesses here, and our first job is to meet with those tenants and make this a great place for them to work,” said Studer. “After that, we will begin to reconfigure the bottom two floors and create programming and activities to engage the community.”

“Gallup research shows cities move in the right direction largely due to private citizens investments. We are grateful to be able to continue to invest in the community to create jobs, educational opportunities and to improve the quality of life for area residents,” Studer continued.