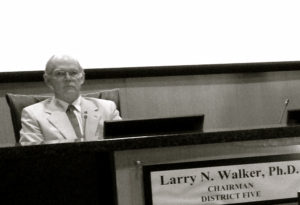 Prior to discussing the sale of the Emerald Coast Utilities Authority’s 19-acre downtown property yesterday, board Chairman Larry Walker took a few minutes to shed light on what he described as a “possible” Sunshine Law violation.

“And to apologize for it, on my part, the failure to strictly abide by the Sunshine Law,” Walker explained.

The chairman relayed how a member of the ECUA’s Citizen Advisory Committee—on which he also sits—approached him after a meeting recently and suggested that the sale of the Main Street property be placed before the advisory committee.

“I told him that I sympathized with him,” Walker said.

The chairman said that he wanted to make notice of the incident, and that it could constitute a Sunshine violation if the board explored placing the matter before the advisory committee. The ECUA board approved moving forward with the sale yesterday—on a 4-1 vote—without any mention of putting the sale before the CAC.

ECUA board member Elvin McCorvey said that a member of the advisory committee had also approached him, wanting to discuss the same.

“But I did not discuss it with him,” McCorvey said. “As a matter of fact, I walked off and got in the truck.”