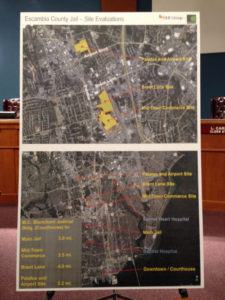 Across the front of the room a series of renderings rested on easels, each detailing potential sites for a new Escambia County jail. One visual aid in particular seemed to sum up the conversation neatly, laying it out in color-coded clarity.

The definitive graph is a side-by-side site evaluation of Escambia’s three contenders for the new jail facility. While the criteria columns for two of the sites swim in a sea of yellow and red — denoting questionable scores on aspects such as location, capacity and ease of development — the third site enjoys a fairway of green.

The choice appears obvious: the so-called mid-town commerce site is the best location for the new jail. But there is a rather awkward asterisk.

“The cons are negative perception of institutional reuse, because it was a Superfund site,” explained Steve Jernigan, of Bay Design, a local architectural firm brought on to help the county assess the potential jail sites.

Much of Tuesday’s town hall meeting meant to familiarize the public with Escambia’s three contenders for its new jail site was devoted to discussing this point and its associated concerns: is it acceptable to locate the new county jail on a remediated Superfund site?

The site in question is the former home of the Escambia Wood Treating Company. The Environmental Protection Agency remediated the site in the 1990s after decades of contamination; the Superfund project also involved the third-largest residential relocation effort in EPA history.

Erik Spalvins, a remedial project manager with the EPA, was on hand during the town hall to discuss the Superfund site and the agency’s assessment of it.

“The conclusion overall is that the amount of exposure for people using this as a jail is safe,” Spalvins said, “if that’s what the community wants to do.”

While Spalvins provided various measures of assurances — detailing remediation methods and providing contaminant measurements falling well below any level of official concern — he also stressed that the EPA was not making a recommendation on using the site one way or another, but simply providing its assessment.

“I don’t want anybody to get the wrong idea that we’re pushing this,” Spalvins said.

Some members of the public — only a handful of community members attended the meeting — expressed concerns about the site. They wondered if inmates and employees would be safe on a site which had been cleaned to ‘industrial/commercial’ specifications, as opposed to residential.

“My workforce is going to work there, people I’m responsible for, I take that very seriously,” said Escambia County Administrator Jack Brown, explaining that he felt comfortable with the option.
Aside from the Superfund-stigma, the mid-town commerce site appears to hit all the right notes: located close to the downtown judicial complex, large enough to encompass future growth and shovel-ready.

Plus, it’s cheap. Working with the EPA and the state of Florida, the county won’t be paying for the actual property, but rather footing the annual monitoring fee of $45,000 for the next 30 years — the final price tag will effectively be a comparatively cheap $1.74 million.

Plus, Escambia will be taking on the Superfund site regardless. Officials have already committed to use the site for economic development purposes, hence the ‘mid-town commerce’ moniker.

“We will still continue to move forward to acquire that property for economic development purposes,” Brown said.

Escambia County commissioners will be deciding on a new jail site during a Nov. 12 special meeting.

“All these properties have pros and cons,” said Brown. “They’re gonna look at the pros, look at the cons, and vote for what they think is best for the community.”

All three of the proposed sites are along North Palafox, with the mid-town site being closer to downtown. The sites located at Airport and Brent are more expensive, will require work to prepare the site for development and are located near schools.

“They can come to school and hear the stories of jails, of moms and dads in jails,” Robinson said of students attending schools located near the proposed sites. “I don’t need them to look outside, past the playground, and see the jail.”

Another woman in the gallery criticized the proposed locales, charging that they were located in
poorer areas.

“I don’t think that’s the conversation I should be having with my grandson as we’re driving to church on Sunday on Palafox — ‘What’s that being built there? That’s the new jail,’” Williams said.

After the meeting, Williams elaborated.

Mid-Town Commerce Site
50.31 acres
This Superfund clean-up site is remediated and considered safe for use by the EPA. While there’s a $0 acquisition cost, there is $1.74 million in monitoring fee over 30 years. A larger retention area for stormwater is also required.

Brent Lane Site
54.13 acres, multiple parcels
This heavily wooded, previously undeveloped site would cost an estimated $2.85 million to purchase. It is the largest site, but has some unknowns, such as environmental and archeological specifics. It would require a larger retention pond and is populated with heritage oak trees. The properties also lie near residential areas and the Brentwood Elementary School.

Airport Boulevard Site
35.90 acres, two parcels
This former site of the Precast concrete plant would cost an estimated $3.51 million to purchase. Demolition of existing structures and an environmental assessment will be needed. There’s a small wetland area that may require mitigation. A wooded area provides a visual barrier for residential neighbors, but the Brown Barge Middle School is located to the east.