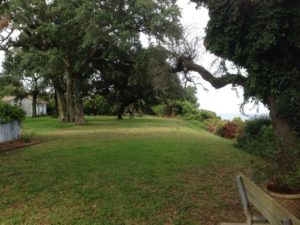 The residents in the Bay Boulevard neighborhood are fighting to keep the city from vacating land on a bluff on Escambia Bay. The city’s planning board voted in their favor on July 14, but residents have been told that the issue may still come before the Pensacola City Council in August.

Following the blueprint created by the North Hill and Cordova Park neighborhoods, the Bay Boulevard residents have created a Facebook page – Friends of Bay Blvd. Park, to keep their neighbors informed of the latest developments at city hall.

In late 2013, the residents of Cordova Park area organized to oppose a zoning change that would have allowed a Dollar store to be built on the corner of Spanish Trail and Summit Blvd. They were successful in stopping the project. Facebook page: No to Dollar General at the Corner of Summit and Spanish Trail!!!.

When the State wanted to relocate its regional parole and probation offices to North Palafox, North Hill organized.  They picketed when Gov. Rick Scott  visited Pensacola, and the state cancelled its plans. Facebook page: NIABY – Not in Anyone’s Backyard

Earlier this year the residents surrounding the site that was once the home to the Pickens school objected to the mayor’s office pushing for exceptions that would allow Manna Food Pantries to build a warehouse and offices in their neighborhood. They organized, attended the planning board and lobbied city council members. Eventually Manna withdrew their plans when it was discovered that city staff had misinterpreted the zoning for the property. Read “Seeking to Heard.”

It has been over 18 months since Mayor Hayward has held a town hall meeting in his neighborhoods. The time is ripe for him to reconnect, face-to-face, with his citizens.