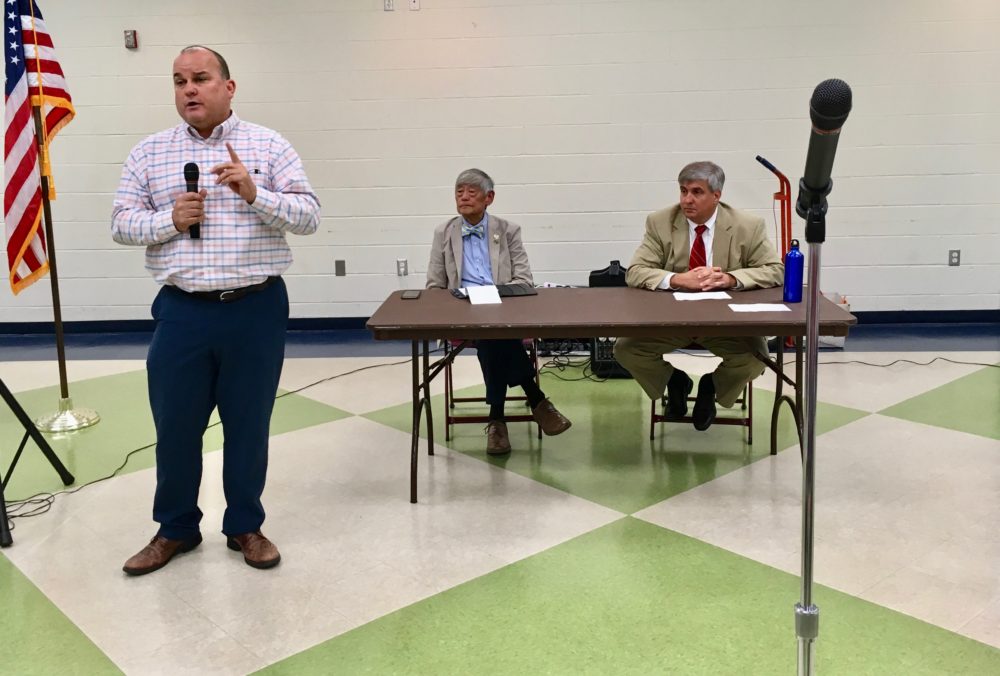 One topic dominated the city of Pensacola’s District 1 town hall Wednesday evening at the Vickery Community Center: the potential land-and-services swap between the city and the YMCA of Northeast Pensacola.

Although some people voiced support for the deal, most of those who spoke to Pensacola Mayor Grover Robinson and Pensacola City Councilman P.C. Wu were against the concept.

“We’re not swapping property,” Beverly Collier told Robinson and Wu. “We’re giving them the farm and then we’re paying them to take care of the animals.”

Pensacola has been working towards a deal with the YMCA which would see the Y give the city its current property off of Langley Avenue to enable the construction of a soccer complex at neighboring Hitzman Park. The Y would then relocate to the city’s Vickery center on Summit, where it would also move its services and eventually construct a new facility on a lot between Vickery and Roger Scott Athletic Complex. Pensacola City Council is scheduled to vote on the issue Thursday night.

Throughout the process, residents of the Scenic Heights neighborhood have raised concerns about increased traffic on Langley and changes to the park at Hitzman. In addition to questions pertaining to the specifics of the deal, those neighborhood concerns were also raised again Wednesday.

Sharon Dickinson, Scenic Heights residents and vocal swap critic, said she was still concerned about the increased traffic she feels a new soccer complex will bring to Langley. She told the mayor that the city needed to conduct a traffic study for Langley prior to moving forward with any deal.

“Before the city council votes we should know what it’s going to cost,” Dickinson said, asking if the city had worked such a study into its math.

Parks and Recreation Director Brian Cooper said that his department was working on the swap logistics, and that funding and planning for a traffic study would be handled by the Public Works Department.

“But the mayor and the Public Works have assured you they’re going to address it,” Cooper said.

Mayor Robinson said that the city would be conducting a traffic study on Langley, and planned to install traffic calming measures — like a roundabout or traffic signal — along Langley at Lessway and also Hilltop. Such traffic calming measures, he said, would lead to non-neighborhood drivers looking for a through-route to choose another road besides Langley.

“Traffic’s like water, it takes the path of least resistance,” Robinson said. “The people that cut through your neighborhood aren’t going to want to slow down. It’s going to cause them to go somewhere different.”

Insofar as the deal itself, there were questions raised about what benefits — beyond the soccer complex itself — the city would realize. They wanted to know if the Y’s use of the Vickery would diminish its availability as a community center, and why the city was offering a 30-year lease, and why the Y was getting to hold onto a piece of their Langley property that’s generating revenue from a cell phone tower.

Cooper will be making a presentation on the proposed swap Thursday prior to city council voting on the issue. Some District 1 residents said during the town hall Wednesday that they’d like to see the city hold off on any decision.

“Everything is a little bit rushed still,” said Scenic Heights resident Krista Hobgood, telling the mayor that neighborhood residents — despite months of back-and-forth dialouge with the city — felt that their input was not being incorporated into the plan. “You guys, we feel like we still haven’t been involved. Now, it’s a done deal, the vote’s tomorrow, 24 hours.”

The Pensacola City Council will consider the YMCA swap tonight. The meeting begins at 5:30 p.m. at Pensacola City Hall. The specifics of the services-and-land deal can be viewed here.