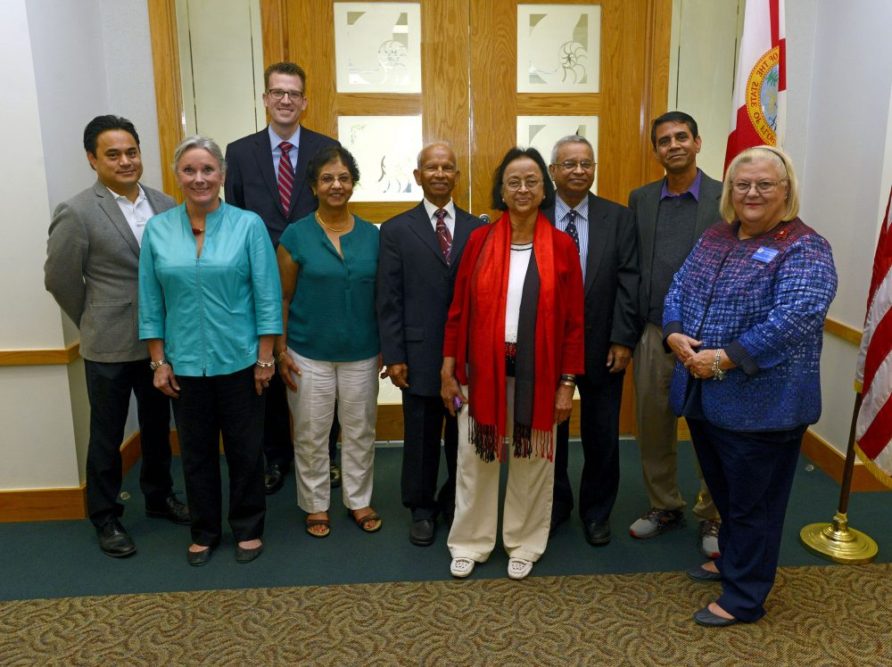 University of West Florida President Martha Saunders announced today a gift in excess of $5 million from Dr. Usha and Mahadeb Kundu to name the UWF College of Health.

The college is slated to be named the Usha Kundu, MD College of Health in Dr. Kundu’s honor. This is the second college to be named after a donor in the institution’s history. Hal Marcus gifted $5 million in January 2016 to name the Hal Marcus College of Science and Engineering.

“This incredibly generous and forward-looking gift will enhance our ability to provide the very best health care education for years to come,” said Saunders. “I expect great things from the Usha Kundu, MD College of Health.”

“The ability to use this gift to enhance our current programs and establish new opportunities ensures continued growth for the UWF College of Health,” said Dr. Ermalynn Kiehl, dean of the College of Health. “We are extremely appreciative of this significant gift and we will be good stewards.”

Dr. Kundu grew up in rural Bihar, India, and graduated from the Rajendra Medical College at Ranchi University in 1969 before she immigrated to the United States to complete her residency in obstetrics and gynecology. Dr. Kundu opened her current private practice in Pensacola in 1983. She is a board-certified OB-GYN, a Fellow of the American College of Obstetricians and Gynecologists, and a Diplomat of American Board of Obstetrics and Gynecology. Dr. Kundu is affiliated with Sacred Heart Hospital, Baptist Hospital and West Florida Hospital.

“I have been extremely passionate about medicine since I was a young child,” said Dr. Kundu. “We have lived in Pensacola for more than half of our lives and work hard for this community. Now is the time for us to give back to our community in a new way.”

“We are thrilled with the opportunity to support the University of West Florida to provide better health education to the region. This gift will increase the development of a well-educated workforce that have the necessary skill sets for employment.”

Her husband, Mahadeb Kundu, is a Fellow of American Society of Civil Engineers, Fellow of Institute of Engineers (India), charter member of Structural Engineering Institute and member of ASCE codes and Standard Activities Committee. Mahadeb Kundu earned his Master of Business Administration from UWF in 1992 and served as an adjunct professor for the University of West Florida from 1984-86.

Their son, Sumit Kundu, is an M.D. and professional in the informatics field in New York.

“The generosity of this gift exceeds our expectations and makes a statement on the value of the growing UWF College of Health,” said Dr. Brendan Kelly, vice president for university advancement. “Two Pensacola residents expressing their commitment at this level to advancing health care in the region through UWF is truly remarkable.”

UWF is currently in the public phase of its 50th Anniversary Capital Campaign, with a fundraising goal of $50 million – the largest capital campaign in University history. With this gift from the Kundu family, the campaign will surpass $56 million.

The UWF College of Health formed in 2015 after previously being part of the College of Science, Engineering and Health. The college houses seven departments: exercise science and community health, health sciences and administration, medical laboratory sciences, psychology, public health, the School of Nursing and the UWF/USF Doctor of Physical Therapy. Together these departments work with the health care community to strengthen interprofessional collaborative relationships and improve the health of the public.

For more information about the College of Health, visit uwf.edu/coh.