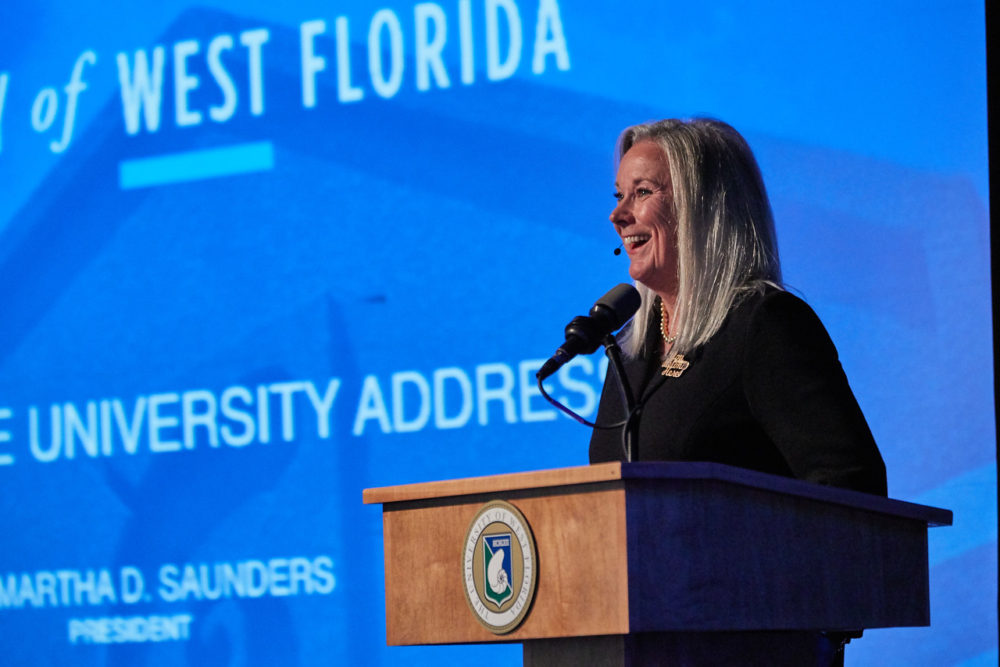 Unlike Mayor Ashton Hayward, Dr. Martha Saunders, president of the University of West Florida, isn’t afraid to address her constituents – UWF faculty, staff, students and alumni- in an auditorium and outline her goals for the coming year. She also has no problem sharing the platform with others.

Saunders shared her vision to make UWF a destination “where the community wants to be.”  In the upcoming academic year, UWF will launch a number of strategic initiatives including:

SGA President Kishane Patel talked about the agenda of the Florida Student Association that he chairs. It includes:

“We who represent 400,000 students in the state university system are lobbying to pass Jan. 12 as a proclaimed day for mental health awareness,” said Patel. “The reason for the 12th of January, being 1-12, is that the 12 schools are uniting as one voice to the state legislators to ensure that they will have the needs that we have.”

It’s not too late for Mayor Hayward to give a State of the Address for 2017. He could allow the council president and police chief to also address the public and give the citizens of Pensacola a full picture of the state of their city.

The mayor’s last address was Oct. 22, 2013, in the Saenger Theatre. He started the program with a video in which he said he wanted to try something different by “defying convention” and shaking things up. He did that by having in the video vignettes about Pensacola from Pensacola Symphony’s Peter Rubradt, IHMC founder Dr. Ken Ford, Blue Wahoos co-owner Quint Studer, and Debbie Calder of Navy Federal Credit Union.

The mayor’s speech followed and lasted about 20 minutes. After the address, he held a press conference with the city administrator and communications director present.

That was four years ago.