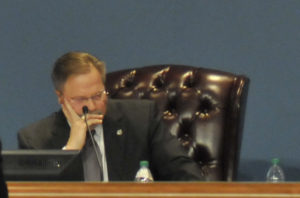 Escambia County Commission Chairman Gene Valentino learned about the mess over at the chamber of commerce a few days ago.

“I’m a little disappointed with the whole thing,” he said this morning. “I don’t wish any ill will to the chamber, but boy, am I disappointed.”

The commission chairman learned about the problem from the head of the Greater Pensacola Chamber.

“Jim Hizer pulls me aside and says, ‘hey, can I talk to you?,’” Valentino recalled. “He said, ‘we’ve got a problem and I don’t know what to do about it.’”

Apparently, there are issues with the chamber’s BP-financed gift card program. While chamber officials are keeping quiet until a meeting scheduled for tomorrow, Valentino relays that the organization was missing about $170,000 worth of cards.

In 2011, the county commission chipped in $2.4 million of BP grant money to be used for the gift-card program. The cards were used as incentives for tourists.

During a meeting on Tuesday, with Interim Country Administrator George Touart, Escambia Clerk of Court Pam Childers, as well as county legal and financial staff, Hizer informed Valentino that the chamber had been able to wrap its arms around some of the issue and was now missing half as much.

But the chairman said the chamber head was unable to say where the recovered cards had gone. And there was still an $80,000 problem.

“At which time I immediately looked at the county clerk and said, ‘we’re freezing all assets except for economic development,’” Valentino said.

The chairman said that Childers, working with the chamber’s firm, Saltmash, Cleaveland & Gund, was now looking into— “we’re not calling this an investigation, we’re calling it an audit”—the matter.

“So, that investigation, excuse me, audit, is underway,” Valentino said, adding that the commission expected a report “ASAP.”

“Five commissioners are not happy at all,” he said.