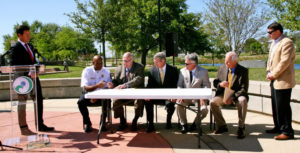 Pensacola Mayor Ashton Hayward joined City Council members and members of his Veterans Memorial Park Steering Committee this morning to announce the establishment of a new foundation to manage and oversee the park.

Emphasizing Pensacola’s special relationship and connection with the military, Hayward said that Veterans Memorial Park should be “first-class.” “It should be a beacon for freedom, a monument to our American ideals, and a tribute to those who have made our nation and our freedom possible,” said Mayor Hayward.

Though the City of Pensacola owns the land on which Veterans Memorial Park is located, responsibility for the park’s maintenance and operation has since the park’s creation in 1993 been vested in a non-profit organization, originally the Wall South Foundation. Mayor Hayward convened the steering committee last year after issues left the previous foundation unable to properly maintain the park.

In its report to Mayor Hayward, the committee stressed the need for the new foundation to be open and transparent. “The foundation has been designed to operate with the same level of openness expected of a public board,” said Mayor Hayward. “Its meetings will be open to the public and its finances will be transparent. This is our duty and our obligation to those who have invested their time, money, and hearts in this park.  “

Following remarks by Mayor Hayward and Steering Committee chairman Jack Brown, the members of the steering committee signed the articles of incorporation for the new foundation, to be known as the Veterans Memorial Park Foundation of Pensacola, Inc. The foundation will be led by a 13-member board, to be appointed initially by the six members of the steering committee who have incorporated the new foundation. “We’re looking for veterans, their family members, or those in our community who share our appreciation and commitment for this park and the legacy it represents,” said Mayor Hayward. “We are looking for stewards and advocates who understand and embrace this solemn responsibility.”