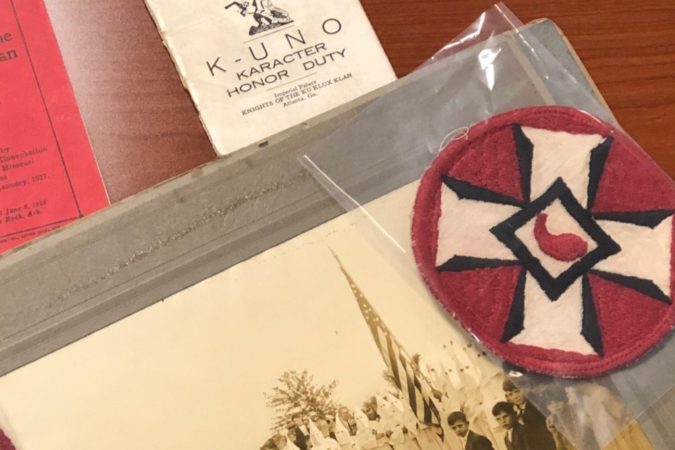 In 1927, the editor of the Ku Klux Klan’s monthly periodical “The Kourier,” asked T.T. Wentworth, Jr. to write an article on the rebirth of the Klan in Pensacola. Wentworth wasn’t chosen because the shopkeeper was a great writer or a historian that would later have a state museum named from him.

No, the editor asked the 29-year-old because the former county commissioner was the Exalted Cyclops of the local KKK chapter. 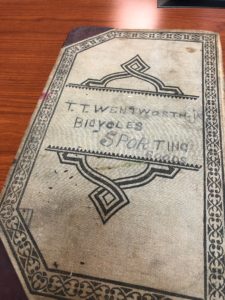 On Monday, Inweekly reviewed some of Wentworth’s correspondence during the 1920s with fellow Klan leaders, members and their families. The documents had been turned over to the UWF Historic Trust last fall, and the trust is in the process of cataloging and digitizing the records so that they will be accessible to the public.

In the Hilton-Green Research Room on the second floor of the Voices of Pensacola Multicultural Center, we examined a ledger, labeled “T.T. Wentworth Bicycles Sporting Goods,” that contained minutes of Klan meetings, financial records and a list of 486 Klansmen.

We also read the history Wentworth wrote for “The Kourier” on the letterhead of T.T. Wentworth Hardware, Tools & Cutlery. As one UWF staffer told us, it reads like a dime-store novel with battles against the Knights of Columbus and “pussyfooting Protestants.”

T.T. Wentworth Jr.’s History of the Klan in Pensacola

Down in Florida, in one of the most predominant Catholic and foreign-element city in the state, in the year 1920, the Ku Klux Klan was organized with something over 150 members.

As soon, thereafter, as the fact became known to the public, things started to happen. A move was made in the part of the worst element in the city to ascertain whom the membership consisted. And as fast as a member became known, persecution was handed on him on every side.

Committees were stationed near the hall and on meeting nights, a list was made of every person entering the hall. The number of cars were also noted and on one occasion, the afternoon paper published a long list of those numbers and caused a great deal of inconveniences to the members.

And the only saving part of this episode was the fact that several car numbers were inserted of persons who were not connected with the Klan. They became very, very much peeved at being accused as being one of the band of midnight assassins and murderers, as one afternoon paper put it.

With all the persecution heaped upon the members of the Klan, the Klan did grow and added strength and prestige until the time came when the members were not persecuted openly.

Several instances of a hair-breath escapes with life and limb was experienced with some of the Klan leaders. At one time, a mob attempted to assassinate one of the Klan leaders at the city court. And the only saving part of the whole affair was the quick action of a .38 nickel plated revolver handed the leader a few minutes before the gangsters made the desperate attack upon the leader, who was just a little bit quicker than the gangster with the gun and got the drop on them, which attested to their cowardice as much as they face the .38 lead slinger. They made off in the opposite direction.

Another incident was when, on a Christmas night, a gang of the worst element of a city, ones who passed in the community for decent people, made an attack on the Klan leader. It came within one inch of causing the spilling of blood as a K. of C. (Knights of Columbus) made the slash at the Klan leader with a keen edge pocket knife and missed his aim. The knife slashed large part in the cushion of the automobile seat in which the Klan leader was seated. This episode was one of the most glaring pieces of cowardice among the ever perpetrated

Incidents aside from those of narrow escapes of life, which were aimed at Klan leader and Klansmen, were those of business persecution and boycott. This weapon was used most effectively on many members, especially some of the leaders.

First thoughts in a predicament as this would be to use hot lead, but there was always means to accomplish things regardless of the bunch of K. of C.’s and pussyfooting Protestants who were wrapped up with the devil’s own. The bank was approached on the subject and they without question advanced the money necessary and the contractor was paid off. The business is still in operation, while persecutions have been heaped upon it. It has weathered the terrible gale of Klan sentiment.

To those who have kept the faith and worked with the Klan movement in this community, we have come through the crucible times in fairly good shape and can only look back over the grim past with some degree of satisfaction. True enough, some of the Klan leaders have caught it on every hand.

Even traitors have worked their way into the four walls of the Klavern and tried to disrupt from within and would have succeeded but for the fact that the E.C. used his authority and opened the back door as wide as the front.

Persecutions, trials, and tribulations have been the lot of some of the most tenacious Klan leaders in this community. Most of those who were chosen as leaders, however, would not continue in the work but utterly failed and weakened the structure and utterly ruined themselves. Those who were chosen to a task and leave it are not worthy of any consideration.

And they, most times don’t get any consideration for those than they have forsaken and neither from those with whom they’ve tried to reach through double-ended manners.

It has truly been a nightmare in the organization of the Klan in this community. However, with all the woes and troubles, there has been a keen bit of humor attached to the work and one who has gone through it if he be a man will never regret his part in the making of one order that is destined to save our Nation from utter destruction.

The Klan in this community is now respected and feared by all those who’ve tried so hard at its destruction.

Many of the most bitter enemies of the Klan here have either moved to other parts or have died.

Like all organizations of worth, the Klan has had its merits tested in the fires of persecutions and like other worthy organizations had come out a winner and will continue to live on and on in reality and in spirit.

After serving as county commissioner, Wentworth ran for Clerk of Court, losing the Democratic primary to Langley Bell in 1926 – 3,273 to 1,822. The year after he wrote the history, Wentworth was elected Escambia tax collector by defeating the 24-year incumbent – 2,308 to 1,963. He held the position held until 1940.

In 1933, he was a charter member of the Pensacola Historical Society, which had considerable influence over how later generations looked at Pensacola’s history. Few records from the Reconstruction era – when Black Republicans held many of the city and county offices – were preserved.

We have more on T.T. Wentworth and the “Secret Empire” in this week’s issue – online this afternoon and on newsstands tomorrow.

2 thoughts on “Wentworth’s sensationalized history of the KKK”