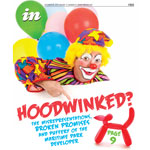 Scott Davison, vice president of development for Maritime Park Development Partners, repeatedly told the Community Maritime Park Associates board of trustees that his company would be announcing soon a hotel deal for the maritime park.

CMPA attorney Ed Fleming is convinced that Davison had no such deal. As part of his record request of MPDP, Fleming also asked for: “All correspondence, including without limitation letters, emails, notes and other documents, between the Developer (or any related entity) and any retailer, restaurant or hotelier (including any agent, employee, agent or representative thereof) concerning the potential development of any parcel of property located in the Maritime Park that would be subject to the Developer’s role in the private development.”

Fleming also asked for evidence of solicitations by Davison and MPDP of hotels and letters of intent from such hotels. “I never received any documents that showed Scott was in any negotiations with any hotel group,” Fleming told the IN.