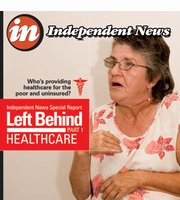 Last August, we wrote about the area’s poor health and the Escambia Community Clinic.

Rosalynda Blackburn shuffles slowly to the exam room at the Escambia Community Clinics. Two back operations on her spine and degenerative discs have gnarled up the feisty woman like an old oak tree.

The 55-year-old twice suffered ruptured discs in 1984 and 1986 working on draw twisters, which made nylon for clothing and other products at the former Monsanto plant. The job required her to lift up to 30 pounds of nylon from near the floor to above her head.

In February, we wrote about the uninsured:

Edward Parker didn’t want to come to the Baptist Hospital’s emergency room but that’s where he spent his Monday recently.

The 36-year-old construction worker hoped he’d get over his illness on his own. But six days later he realized he finally needed to see a doctor, he was feeling worse.

Parker doesn’t have health insurance coverage. In fact, he says the only time he was covered was for three years when he worked as a chef at a Perdido Key restaurant.