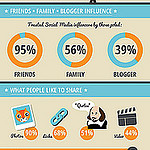 According to SocialToaster Super Fans, it was President Barack Obama.

Social marketing platform SocialToaster recently conducted a survey of 3,000 Super Fans and asked them to rank the most influential people online.